Fab and the Future of Creativity

This is the second part of a report of YouFab Global Creative Awards Ceremony. (See here for Part I.)

The talk theme was Digital Fabrication and the Future of Creativity. Appearing on stage were Hiroya Tanaka (Associate Professor, Keio University SFC / Founder of FabLab Japan) and Yukiko Shikata (Creative Curator). Both of them served as members of the YouFab 2015 judge panel, which was made up of 6 specialists from various countries and fields. YouFab Awards Chairman Toshiya Fukuda served as mediator.

We began, with a video message from a panel judge Seiichi Saito (Rhizomatiks / Creative & Technical Director), who could not attend on that day. 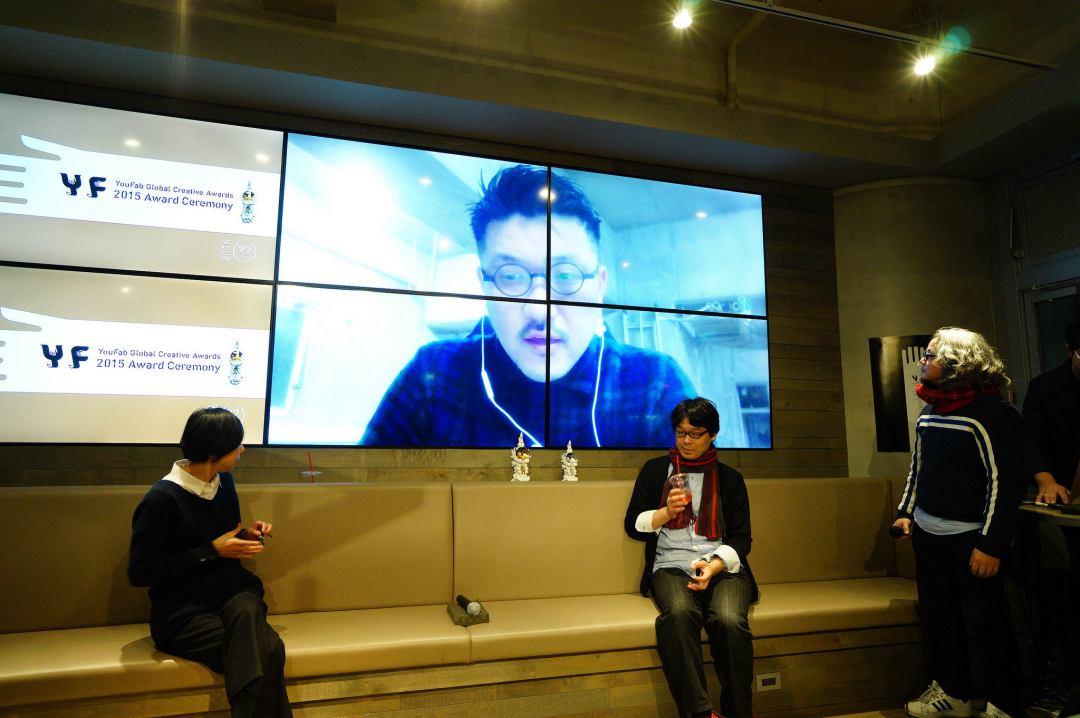 Saito: This year we saw many new tools and materials and the works influenced by them. With the popularity of Fab, it feels that, instead of originality, products with functionality, safety, future promise and possibility were chosen to receive awards. And in the future, things like biotech may become more involved as well. For craftsmanship, it is important to see things from a slightly different perspective. At Rhizomatiks we often speak of (in a good way) “wasting technology.” The interesting things born from looking at something from all manner of perspectives are the ideas that can be used in business as well. I hope that in the future such an environment will continue to spread.

In the following talk by Mr. Tanaka and Ms. Shikata, they spoke of their overall feelings concerning this year’s YouFab. 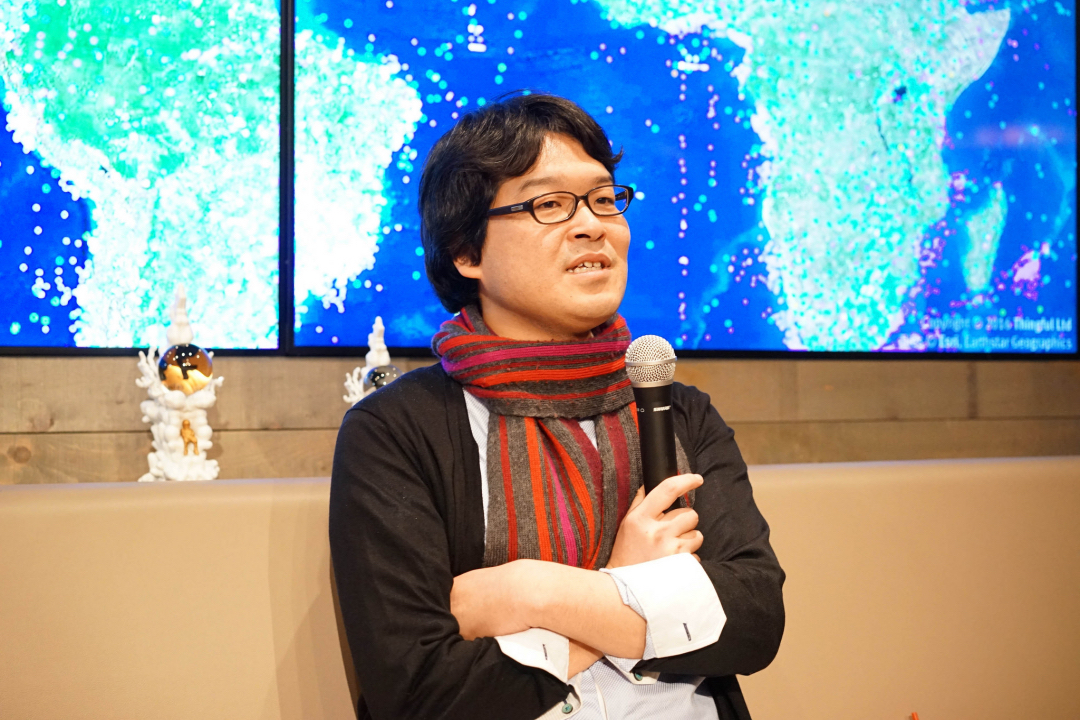 Tanaka: Grand prize and First prize this year were a kind of geeky and used advanced technologies—in a way you could say they were the honors students. But the works that won the special judges’ awards were multifaceted, either combining old and new technologies or making us face culture and society in some way. Also, for Fab that is often misunderstood as “press a button and something will come out easily,” it felt like this year there were many works born from the time, passion and teamwork and comes with good old hard work. 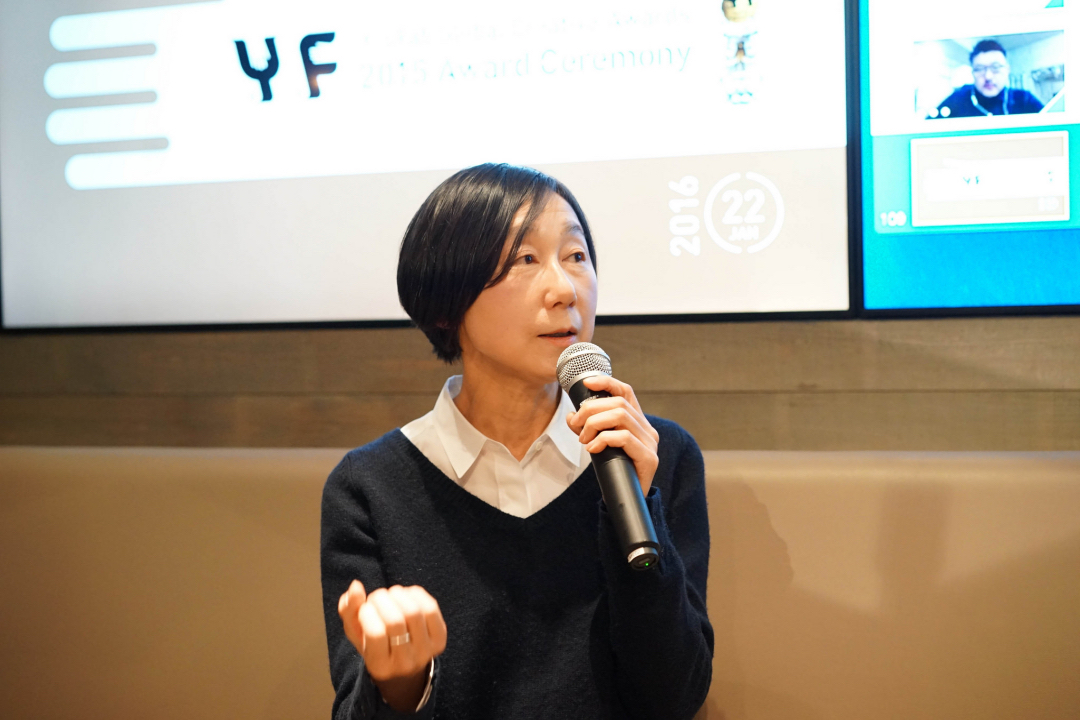 Shikata: Compared to last time, there was much more variety in the types of works submitted, and so the process of judging felt like a completely different experience from last year. Including the works that still have a ways to go, the multi diversity was so interesting. As a result, many of the special judges’ prizes were caught by this multi diversity. I think there are times where certain styles take hold and others where those styles effect change. It feels like this happened this year.

In this situation with the propulsive power of these many and varied styles, what exactly is the meaning behind the “category” that must be designated when applying to YouFab? The pair spoke regarding this point.

Tanaka: Even if we were to remove the categories, I think the awards could work out if the judges work hard. Also, generally speaking, there seems to be some consciousness working among the judges where, in the design space things that are “above design” and in the art space things that are “above art” end up being chosen. I guess you could say that everything is “Beyond” [Laughs]. Still, in the sense of communication from the makers, how they want us to “see” their works, having categories can be a good form of communication.

Shikata: It feels like a chicken or egg problem. Still, judging and interpreting can be difficult without categories. For example, whether it (that category) will enter the market or not. So, as one possibility, we could keep things somewhat separate but also value those things that don’t quite fit in. And I would like for those things that move the boundary lines “Fab” too. 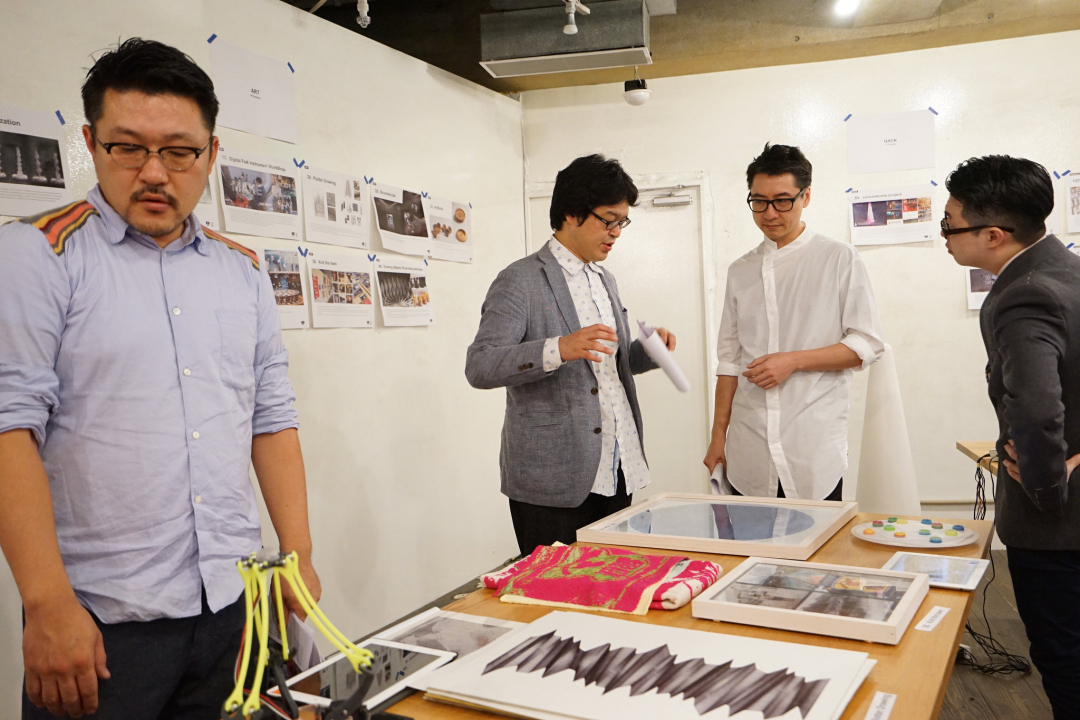 From the judges panel: Judging was conducted using the categories of Product, Art, Hack, Machine and Beyond.

Then, Fukuda tossed in a question concerning a point touched on in Saito’s video message. In the past, Fab had many prototypes, but, in the current state where many works are complete enough to be products, what will become of the relationship between experimentation and the everyday?
Tanaka: Even if one is looking to make products from the very beginning, it often starts off as something made by chance with friends and then someone else you met by chance will say, “It would be cool if it became like this.” Things evolve in this way, and sometimes we arrive at a final product after this sort of repeated struggle. For craftsmanship at Fab, there is often such an underlying role playing game story, and so it feels like there is a project style different from the more “direct” or straightforward approach. There is a sense of just doing for the time being before then spinning out a story with societal interactions.

Shikata: It is interesting to see something born from interactions between people. One designer I like is Usman Haque (note: He is involved with creation of the search engine Thingful specialized for the Internet of Things (IoT) and other works.) His creations cross the borders of art or design, and his belief is that we should all be able to share in them. In this way we can connect people and stimulate further craftsmanship. And so we spread not only techniques but also the ability to produce ideas. I think this is the epitome of what Fab is.

With this concept, the talk then progressed to the concept of “Fab as a catalyst.” How will the connections among people and places created by Fab open the future possibilities of craftsmanship?

Tanaka: I am excited for how Fab can lead to new points of interaction with domains that digital technology and expression that were closed off until now. For example, there are primary industries like knitting for older women, fishing and agriculture.

Shikata: This time we saw some experimenting with the traditional arts. By connecting with what is old or what already existed, we can discover new expressions and new interactions. Also, from hubs of art and science, researchers can reach out and come into contact with a wide variety of peoples. Also, I think this social and societal aspect can involve many communities and we might discover something together.

The topic then also touched on the hot topic in recent years of biology and biotechnology. What will happen when creations that involve collaborations between humans and nature continue to evolve? 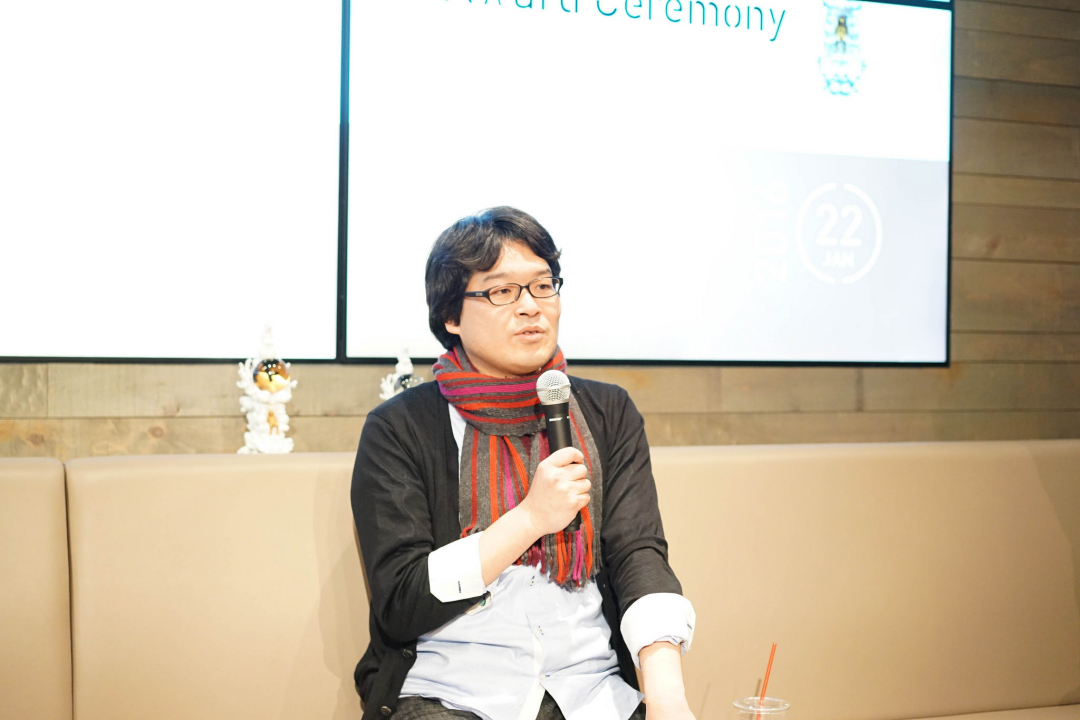 Tanaka: Originally with Fab we had the theme of how we should connect Digital Data=Information and Materials=Substance. 3D printers and laser cutters have come to be used as tools that can connect information and substance. Within this, the spotlight is shining on “life” with DNA=Information and Cells=Substance. Now linked BioLabs are being established in FabLabs around the world, and tests for biotech experimental devices made at Fab are underway. For example, for the Japanese people it would be interesting if we developed something like biotech experiments with pickles [Laughs].

Shikata: For me too, for example when talking to a creator that made compost, I had the idea to be more proactive about eating fermented foods. So you could say that this field is a close neighbor and it also feels like the place where everything will come together.

Tanaka: There is the nuance of the experimental biology of biotech, but in a more general sense there is a tendency to focus on the recycling of resources within the ecosystem. At the Keio University Kouya Tanaka Laboratory, we are thinking of using “Field Fab” as our keyword. Actually, we recently received 1 or 2 hectares of forest. Since we got our forest playground, of course the first step was to do a 3D scan of the trees [Laughs]. Lately I’ve been frequenting the hospital, and looking carefully at my CT scans, there is a very complicated microcosm living within me. Inside my own body, at the closest possible location, lies a very deep field. I want to investigate that too.

To me, Fab is fundamentally about “experimenting.” In YouFab, the participants are presented with the task of them choosing how to use framing to produce their works, but, even so, if they simply start with their framing and produce products, they are not different at all from the artwork of the past. Indeed, it is important to focus on the products of experiment and then develop a way to change that into a form of expression.

Shikata: At first, trial and error is certainly important. In the art world too, the places for art are no longer restricted to specialized locales like art museums. The artists themselves become people that promote this too. So I always say that once the work is completed it should be presented to the world. From this, feedback is born and, in turn, further progress.

Mr. Tanaka spoke of how one of his older acquaintances has been obsessed with taking his collection of insect photographs and affixing them to a 3D model. It seems that he is now even playing with 3D printing. For him, who “Fab in order to relearn about nature and living things and see them in a new light” was captured in Fukuda’s “possibility that can even connect to the activities of the elderly.” 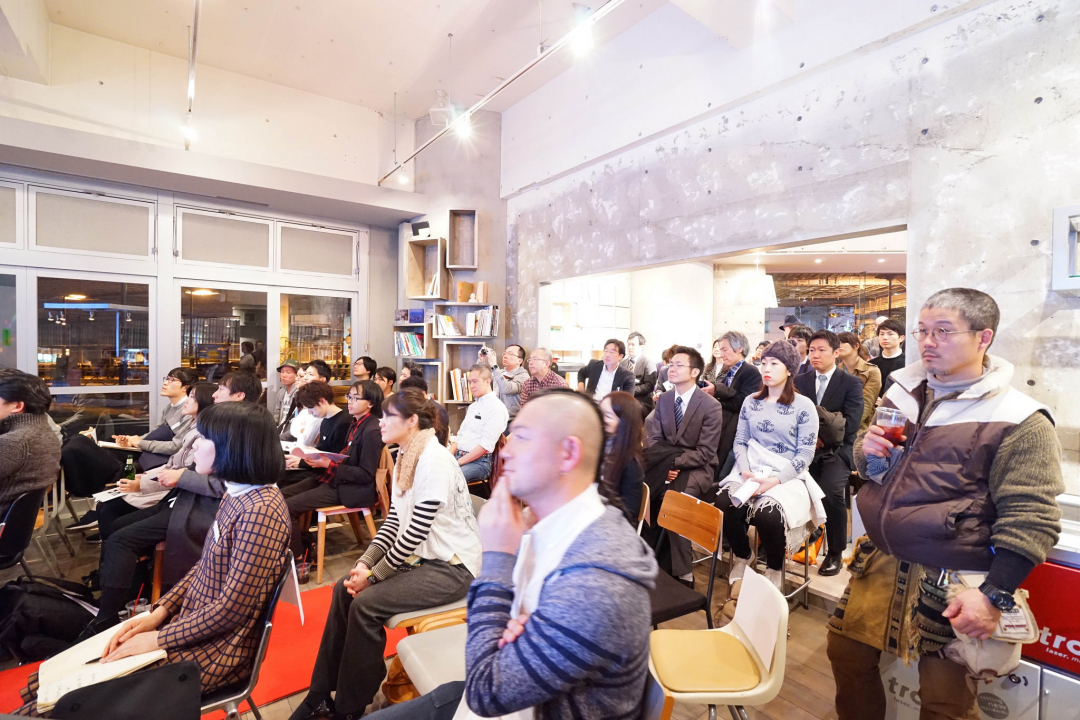 The mediator Fukuda joined Tanaka and Shikata to speak of this day where different specialized fields came together and intermingled. That scene was a symbol of Fabs roles as a “connector” and a “catalyst.”

Also memorable was the scene of award winners and attendees interacting on the day of the event. The contest does not only deal in “finished products.” YouFab is also progressing Fab scenes that are currently developing with a look towards the future. We cannot wait to see what kinds of expressions will take place in the future. As for those of you interested in participating as “makers,” how about polishing your ideas in preparation for the beginning of the application. 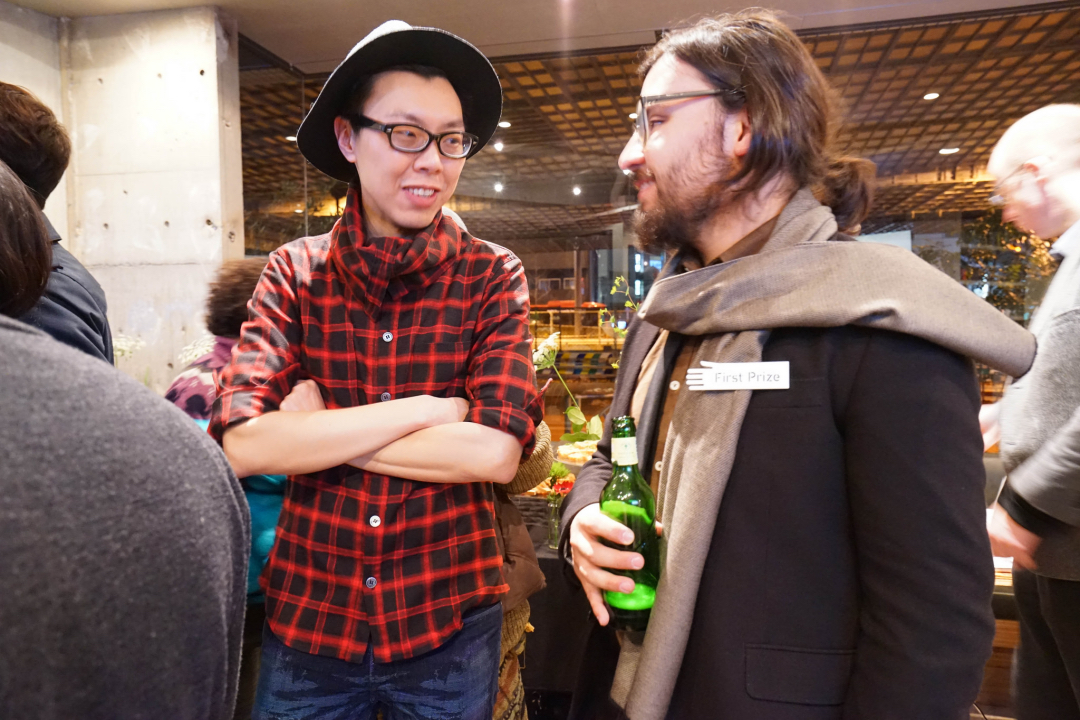 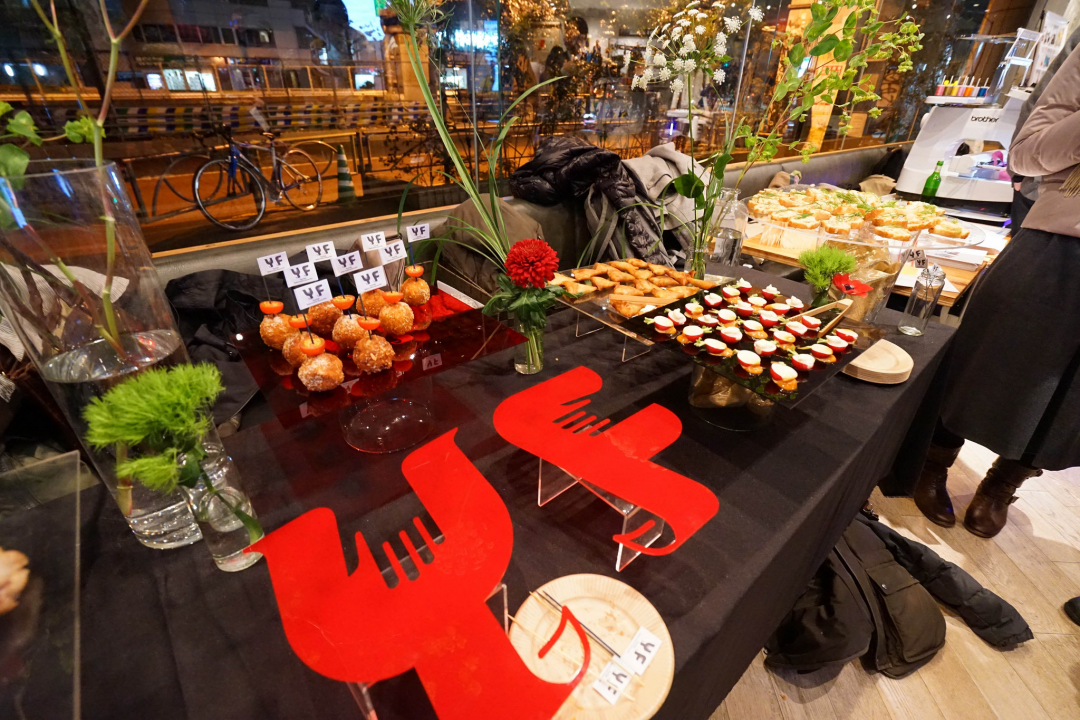