The first part of the report for the YouFab Global Creative Awards 2017 award ceremony is available here.

In the second division of the award ceremony, Amy Karle, who received the Grand Prix, gave a presentation. 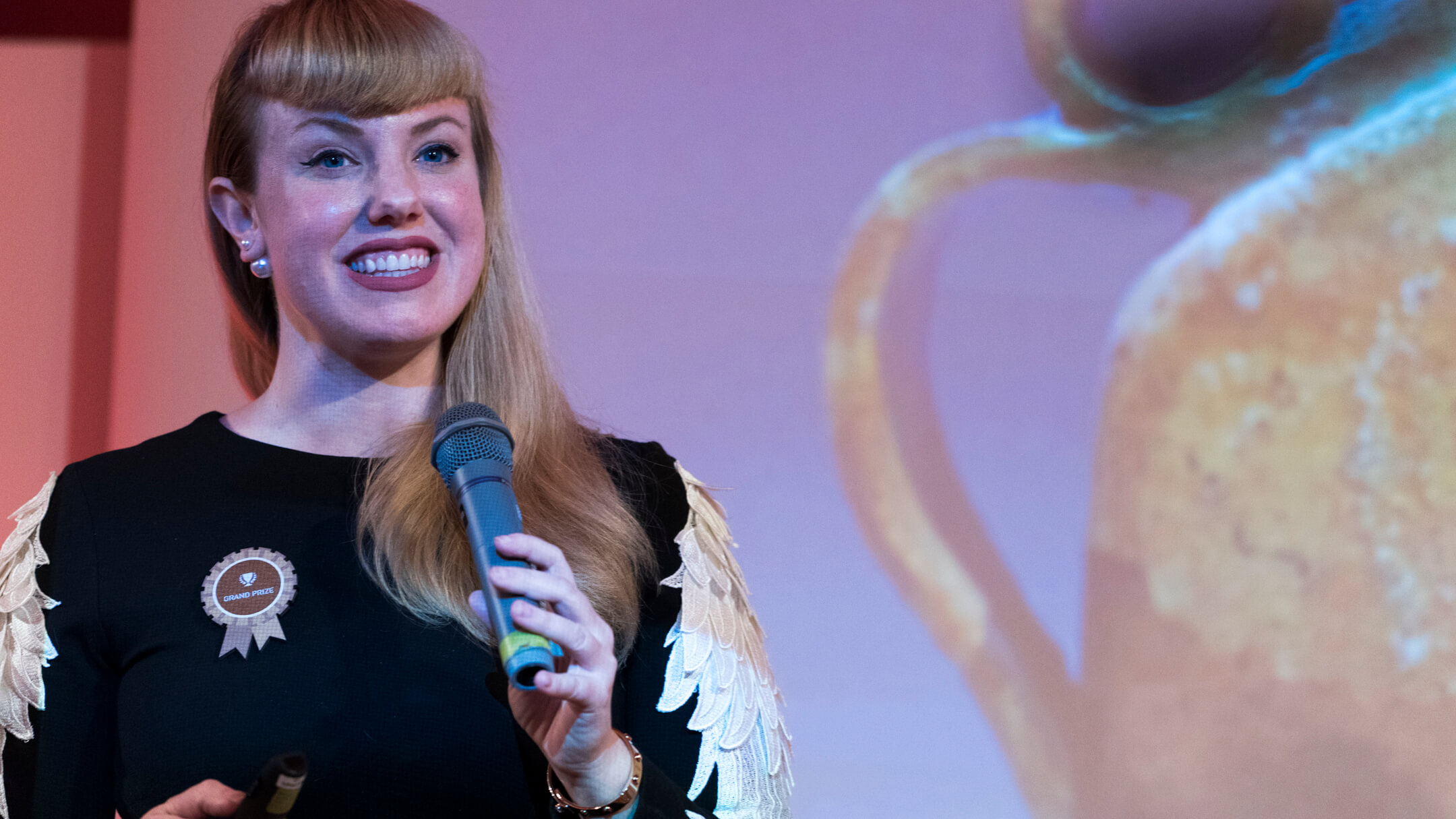 At the start of her speech, Ms. Karle stated, “Right now, we are en route to the fourth industrial revolution brought about by exponentially evolving digital technology.”

“I am an artist that creates art pieces through new media and technology, and as well as a scientist. However, technology is just a tool. What is important is the thoughts and processes that led to the creation of the art piece, and I continue to question “what humans are” through this process.”

Describing how she was “charmed by the structure and beautiful molds of bones” in her childhood, she told of how she gained the inspiration for this piece of art, first from her mother’s death by cancer, and then her own experience of giving birth. 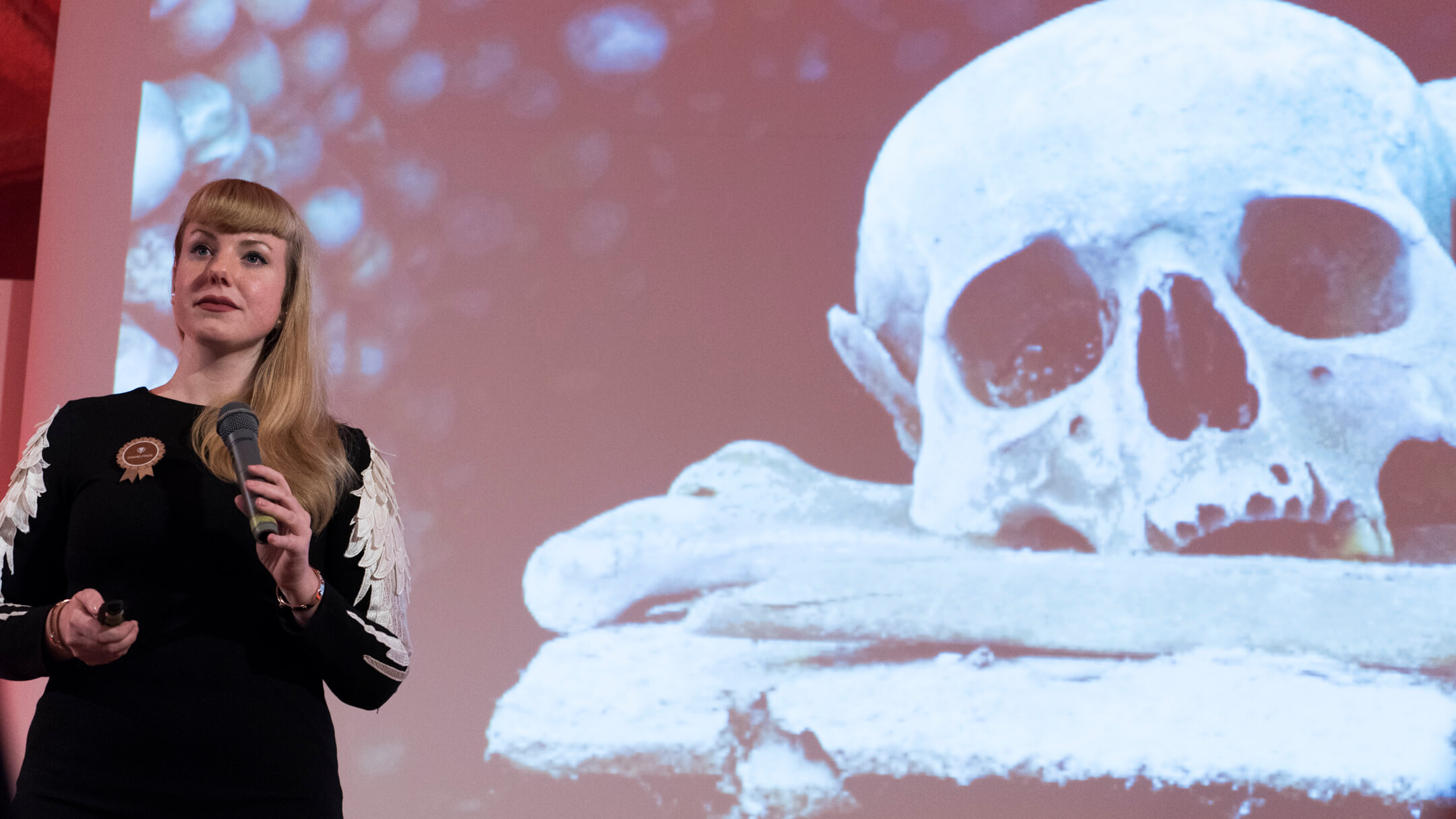 “To me, bones were strongly tied to the image of “death”. However, through the process of pregnancy and giving birth, I became interested in the aspect of them being the foundation of the structures that support life. The death of my mother and the birth of my child were two events that became connected as if in a loop, and I found myself wanting to pursue the image of “life” that bones portrayed.

At first, she created art pieces that were 3D sculptures faithfully reenacting the process of how bones are made, but one day, the thought came to her to “let the bones design themselves.” “Bones become specialized and make up the entire skeleton just from two cells. I felt the intelligence of the bones themselves, which surpassed human knowledge, through that process. And so, I thought of using that hidden intelligence to create a work of art.”

This was how the concept of “Regenerative Reliquary”, to create the possibility of life from inanimate objects, took shape. For the motif of the design, she chose a hand as you could tell with a single glance that it belonged to a human.

First, she enlisted the help of experts in biology and biocompatible material, and used CAD to design a lattice model of the bones that would form the scaffolding for microbiological culture. However, this lattice model had to have a complex porous structure resembling sponge in order for the cells to multiply, and it was also necessary for the material to be of gel consistency and highly biodegradable. 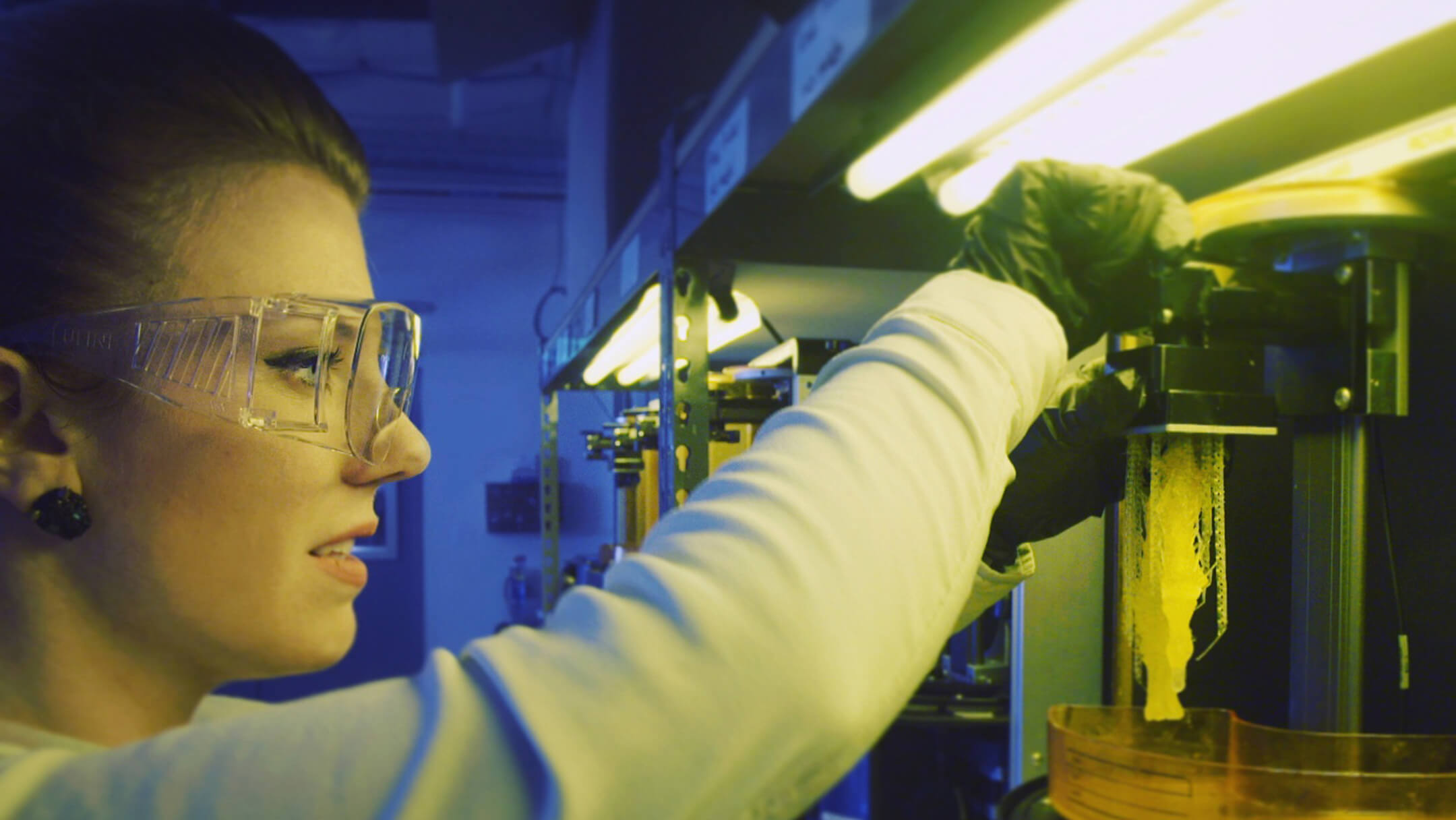 “Just the process of 3D printing the lattice model for that sake took a really, really long time.”

Ms. Karle continued to share that the process of planting the mesenchyme stem cells harvested from an adult doner into the complete lattice model and nurturing them was also “a series of trial and error.” Even so, she showed her resilience by stating that “all the processes led to many lessons learned and discoveries made.”

“The result of this venture was that new technology was born. I think that this project was a success because I was able to collaborate with specialists of various fields, and also because of the newest digital manufacturing technology.”

On top of that, she states that she is thinking of how she can contribute through her creation of art and the relevant processes for the sake of a better future.

“I have a childhood friend who is battling an incurable disease that requires her to get a lung transplant, but there are many risks that come with transplants, such as organ rejection.

owever, if the application of Regenerative Reliquary becomes established and it becomes possible to cultivate organs using a person’s own body tissue, there will be less risks that come with the carrying out of transplants.”

Lastly, Ms. Karle ended her speech with the following words.

“Technological innovation is advancing with terrific momentum, but we will surely find ourselves facing ethical problems in the future. However, what is important is that it is always ourselves that decide how we use technology. What are humans? What should we do? I will think of the answers to these questions together with people who specialize in different areas. I think this is the best way to utilize technology for the sake of a better future.”

Looking back on YouFab2017, filled with various questions

In the third division of the event, there was a special talk between the judges, Mr. Hiroya Tanaka, Ms. Julia Cassim, Ms. Shiho Fukuhara, and the Grand Prix award winner, Ms. Karle. The moderator was Mr. Toshiya Fukuda. 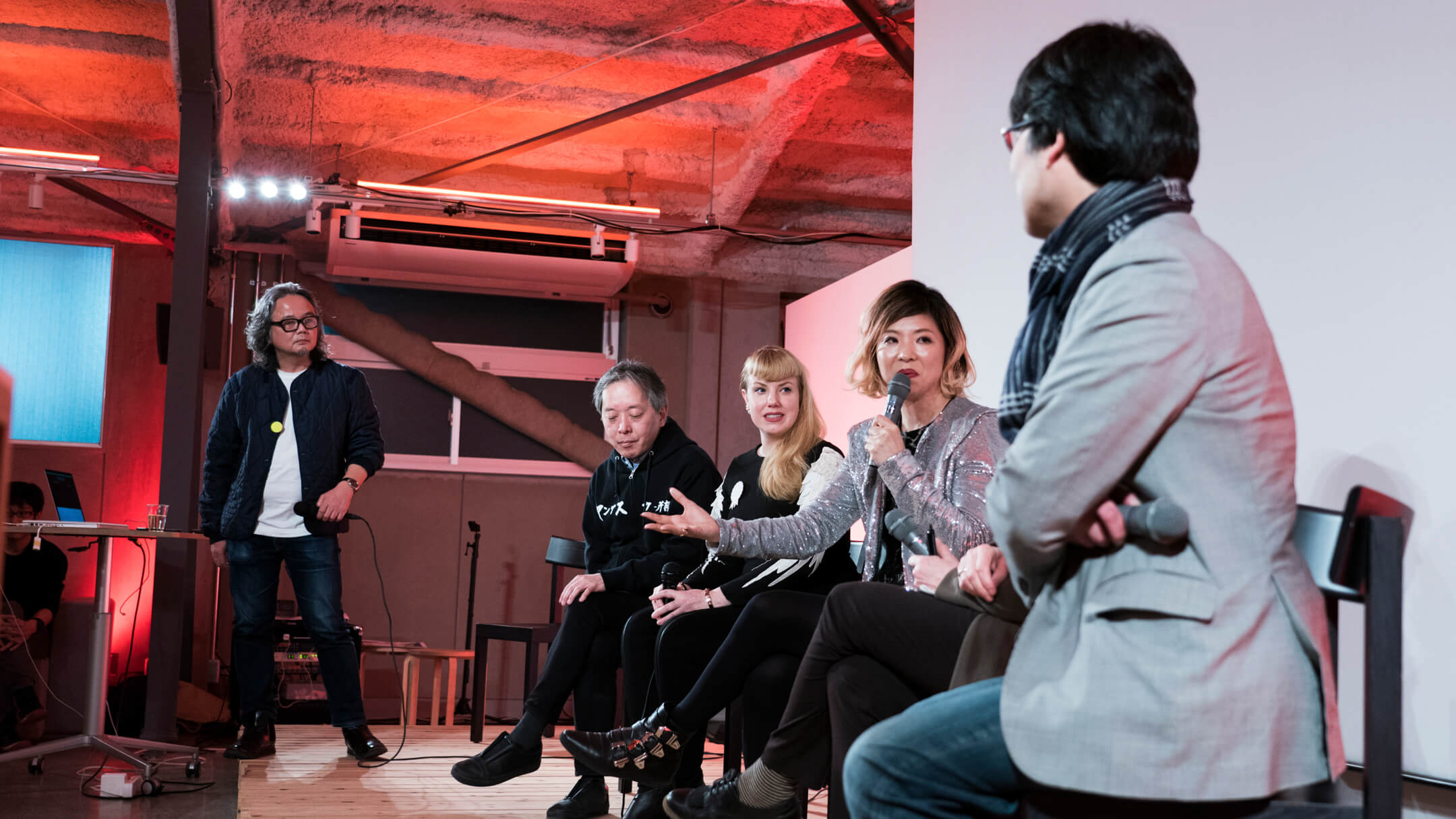 “This event is clearly different from the past YouFab events.” Mr. Tanaka proclaimed this at the start of the talk. He detailed his honestly feelings that“in this YouFab event, I felt that Fab is not just “creating things” anymore. I am excited as the second chapter has finally begun.” 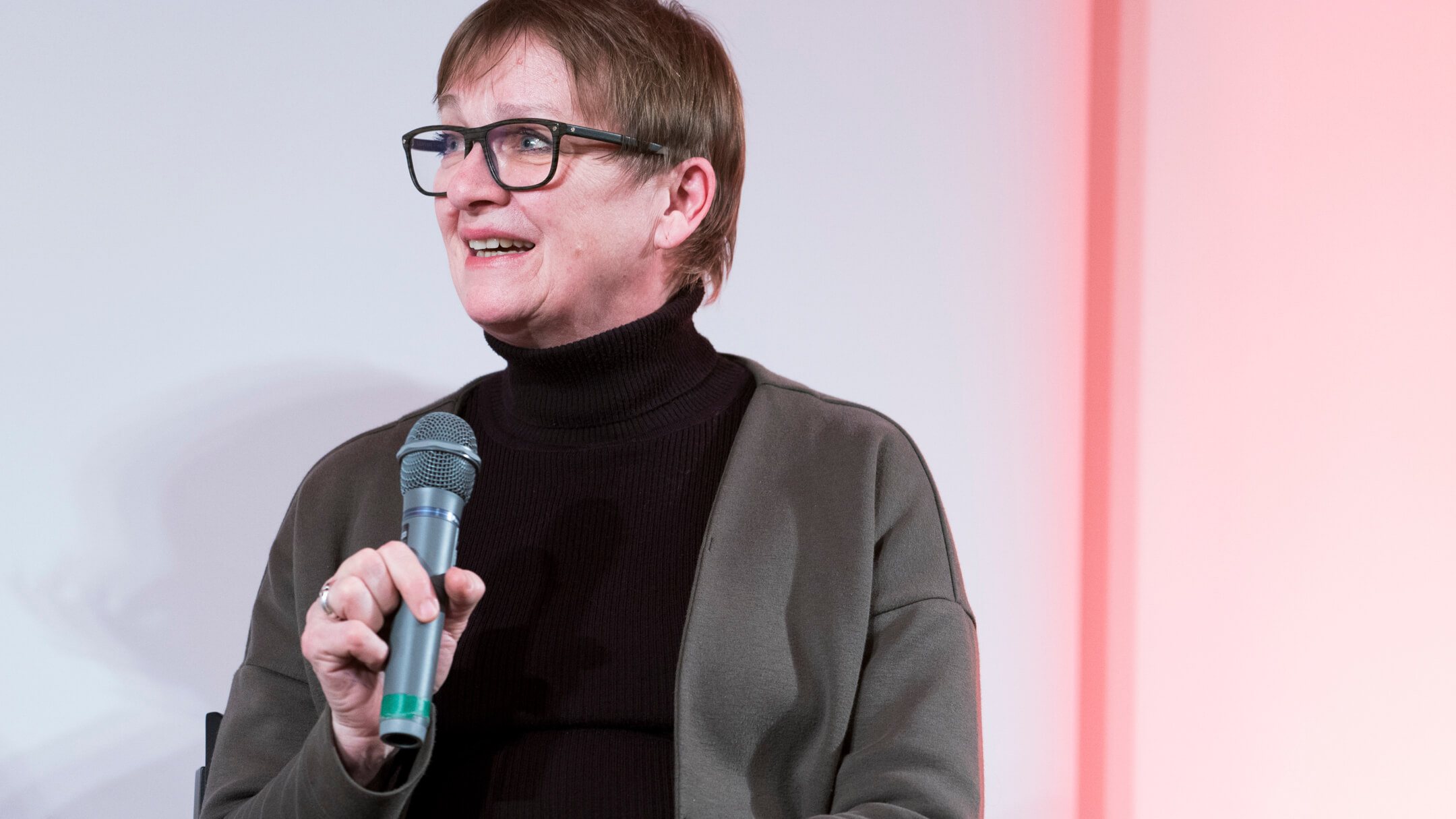 Ms. Cassim, who studied sculpture making in art university, looked back on the situation from the end of the 20th century to the 21st century when disproportionate emphasis was placed on digital expression, remarking that, “It was a painful period. Digital fabrication created a hole in the wave of thinking that there was only value in something digital. Now, young people are once again interested in making things with their own hands. This is because creating things has to stem from practical learning. Through digital fabrication, a two-way vector was born in which people’s internal changes were displayed externally and what was on the outside became internalized. Creating things now comes hand-in-hand not just with logic, but also physicality. I feel that times have changed for the better, and people are starting to get back the humanity that they had previously externalized.” 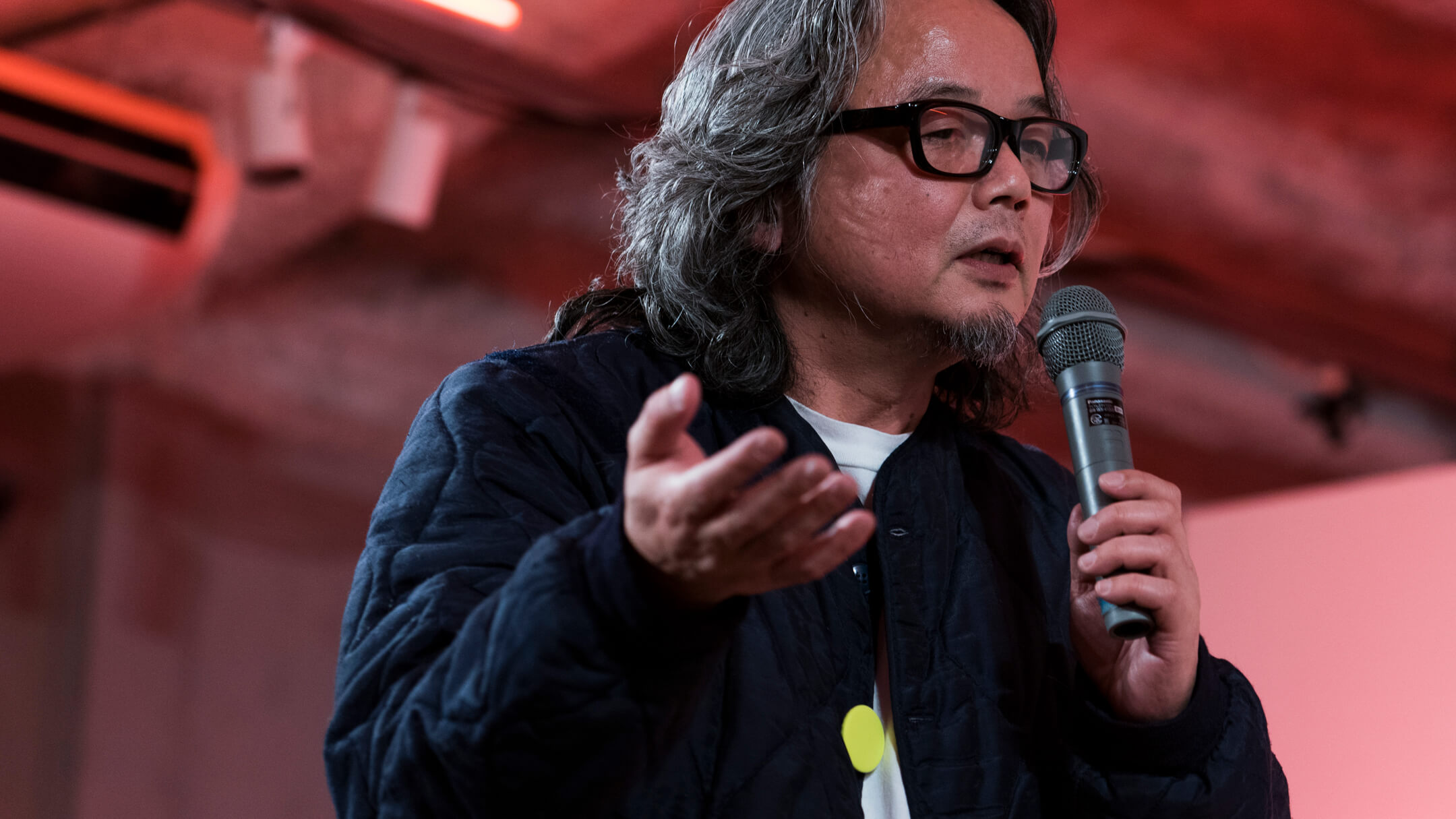 The moderator, Mr. Fukuda, gave a new outlook while putting forth his unique point of view. “In that sense, humans are also creations that were fabricated from the digital code of genetics. The return to creating things in real life from digital fabrication can be said to be proof that humans are once again starting to be conscious of the physical body.” 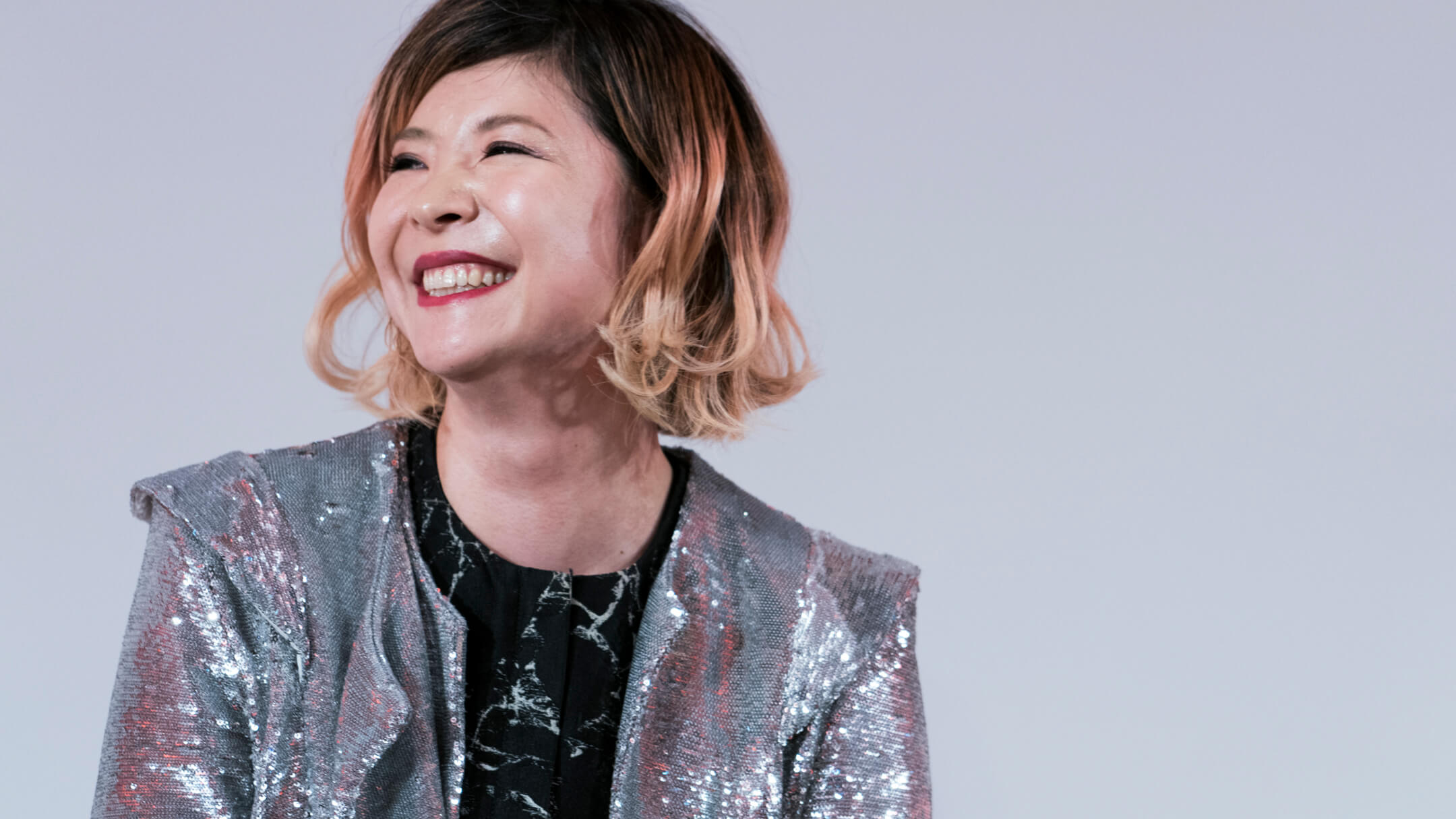 As a general comment on this YouFab event, Ms. Fukuhara pointed out that “there were many pieces that had hands or fingers as a motif.” She went on to say, “Actually, finger (‘digitus’ in Latin) is the root word for ‘digital’. Now, with the progress of the combination of digital and physical aspects due to Fab, regarding the questions “what is life” and “what is matter”, there is a reality that cannot be confronted other than by use of hands and fingers. I feel that this concept can be clearly seen from this year’s YouFab event

Ms. Fukuhara commented, “In bio art, programming digitally will never go exactly the way you wanted it to. By using your hands for trial and error, you will be see something for the first time. It is through that string of processes that you feel the wonder of life.” Upon hearing Ms. Fukuhara’s comment, Ms. Karle said something that left a deep impression on those who heard it. 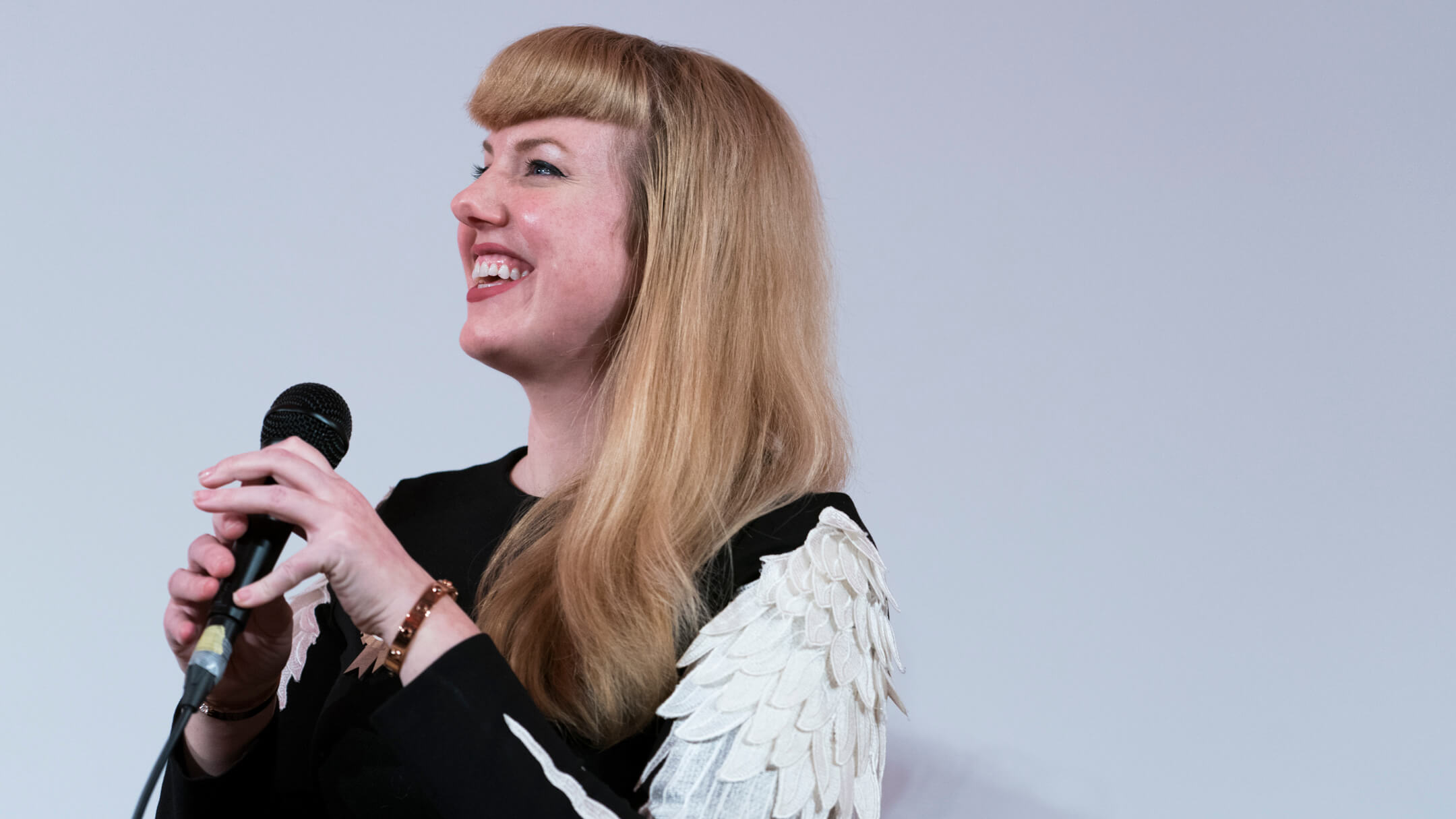 “When creating “Regenerative Reliquary”, my partner in the creation team suggested, “How about using cancer cells? They proliferate even in harsh environments.” Although that idea was not used due to safety reasons, when I think about it, my mother died from cancer. If her cancer cells had been planted into the bone lattice model, I wonder what would have happened. The finished work would have been a part of my mother, and at the same time, not my mother herself, and that would probably have given rise to a new question about life. I feel that bio art has the power to open up unknown territory that cannot be reached just from a scientific approach.” (Ms. Karle)

After the topic of bio art, critiques were made regarding the particularly prominent pieces of art among this year’s award-winning pieces. For example, chief judge Mr. Tanaka talked about Taiwanese university student Wei-Yu Chen’s “I’m evolving into a box”, which he felt was “the most Rock-feeling piece this year.”

“It is a work of art that destroys the original context of Fab by simply attachingarms and a brain (Raspberry pi) to a metal box, hardly using Fab equipment such as 3D printers. The idea of combining AI with metal devoid of life and letting the box learn to function as a box is brilliant, and I felt that it was closest ot the theme “Rock It!”.” (Mr. Tanaka) 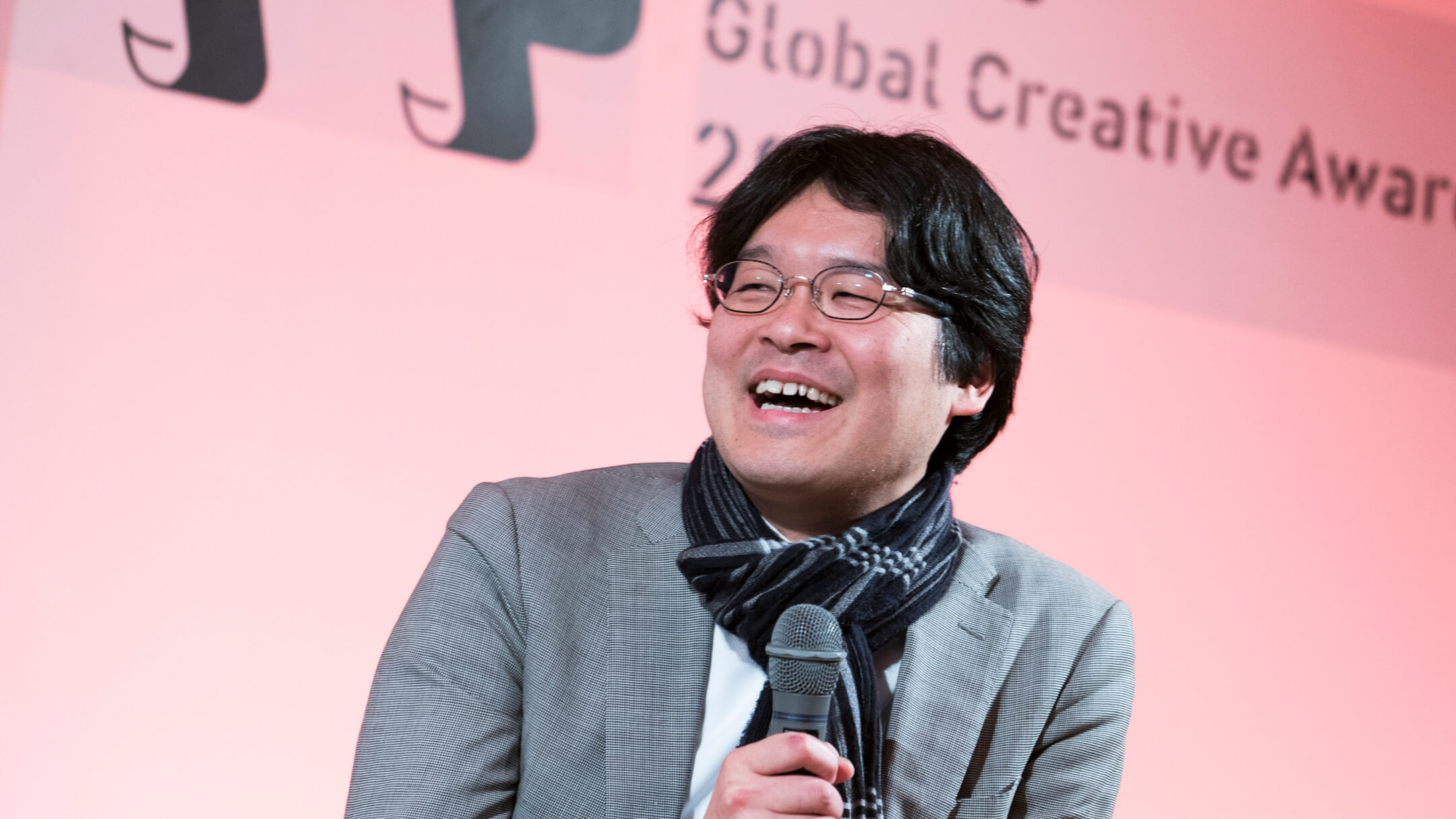 Grand Prix winner Ms. Karle selected “Vase to pray -8.9Nagasaki-”, created by a project team Vase to Pray Project made up of young Japanese designers. It is a product that questions peace, made by scanning a vase that had been deformed by the heat from the Nagasaki atomic bomb and recreating it with 3D printing. Ms. Karle gave it high praise, saying, “Just one look at it conveys the sublime connotation it holds, that it cannot be defiled. I also appreciate the quality of the mold that was achieved through 3D printing with powdered nylon.”

YouFab 2017 was filled with various “questions”. People of different nationalities and ages, that come from different backgrounds, pose “questions” through their works that again give rise to new “questions” while hailing one another. And thus, they turn into seeds of innovation for the next period and lead on to the future. “This cycled is brewed in the frame which is YouFab. After every award ceremony each year, I feel that way.”The chairman Mr. Fukuda wrapped up this year’s YouFab with those words.

Fab finished playing its simple role “creating things” in 2017. From now on, it will surely join antipodes and create multiple unknown middle territories. YouFab will also probably strengthen its presence as “an experiment grounds for methods of creation” with free use of Fab, which is advancing more each day. We can look forward to the future of Fab, which has started its second chapter, and YouFab. 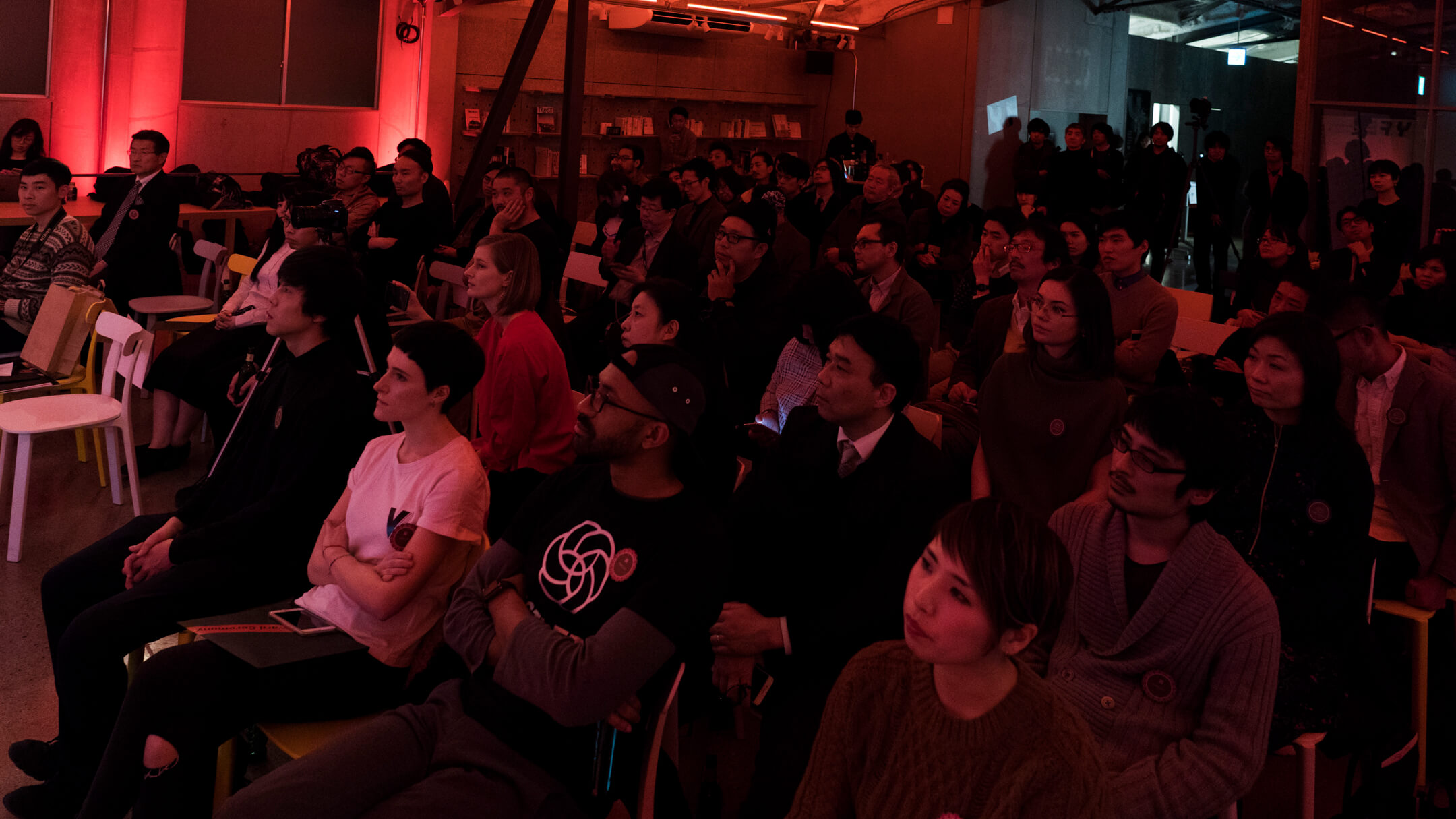