Judging committee chief Asa Ito and one of the YouFab 2021 judges, Fiona de Bell and Roel Schoenmaker from Cascoland, held an online event on August 30 to explore this theme in depth.

YouFab started in 2012 as a way to celebrate digital fabrication, when 3D printers and laser cutters were exoticized to a point that people thought these tools could save the world.

Now having 11 branches across the globe, FabCafe has served as a space where local creators can engage and inspire each other as humanity continues to reap the benefits of digital fabrication.

Democratic experiment(s) -- how they emerge from anguish

Ito referred to the book “Fukushima Monologue” by Seiko Ito to show us some examples of these democratic experiments. “That caused the dysfunction of our nation and our national system, not being able to provide public services — leaving people no choice but to work on things using a bottom up approach,” she recalls.

One is about a woman who set up a radio station at an evacuation from scratch. The place she was evacuating was located in the mountains and had poor radio reception, but she was able to utilize radio devices she found in supplies that were sent to Fukushima from all over the country. She crafted a very local radio station to encourage the evacuees who were staying at the center.

Another example is about a girl who began a farm for abandoned cows in the town of Okuma, where sat the crippled Fukushima Daiichi nuclear power plant. Since residents were forced to evacuate after the nuclear disaster, many domestic cows were left behind and starving to death. However, since these cows obtained the ability to metabolize cesium, it prompted her to start a farm for these animals.

These two examples illustrate how people can come up with very clear ideas to support each other and get through rough times. “I assume people have similarly gone through difficulties during this pandemic,” Asa said. “And that is where, I believe, creative democracy emerges.”

Explanation of Experiment(s) of democracy

The pandemic, YouFab, and democracy through creation

The novel coronavirus has greatly influenced the way we interact with others.

In his book “How Contagion Works” by Paolo Giordano, the author points out that the pandemic had the power to remind human beings that we are all “connected”. Living in a society that normalizes mass production and mass consumption enables us to forget that our lives are based upon the sacrifice of many things that we could never even imagine — we neglect who is behind the products we use and their backgrounds.

However, we are in fact a member of a community with an array of other matters, whether it be a living organism or not, and the pandemic has helped us remember this very fact, that we are all connected with uncuttable ties. “We can no longer stand by anthropocentrism. Instead we must engage in dialogues with these various stakeholders, whether it be a living being or not, to seek a new chance of democracy. This is exactly what we hope people realize through YouFab2021,” said Asa. 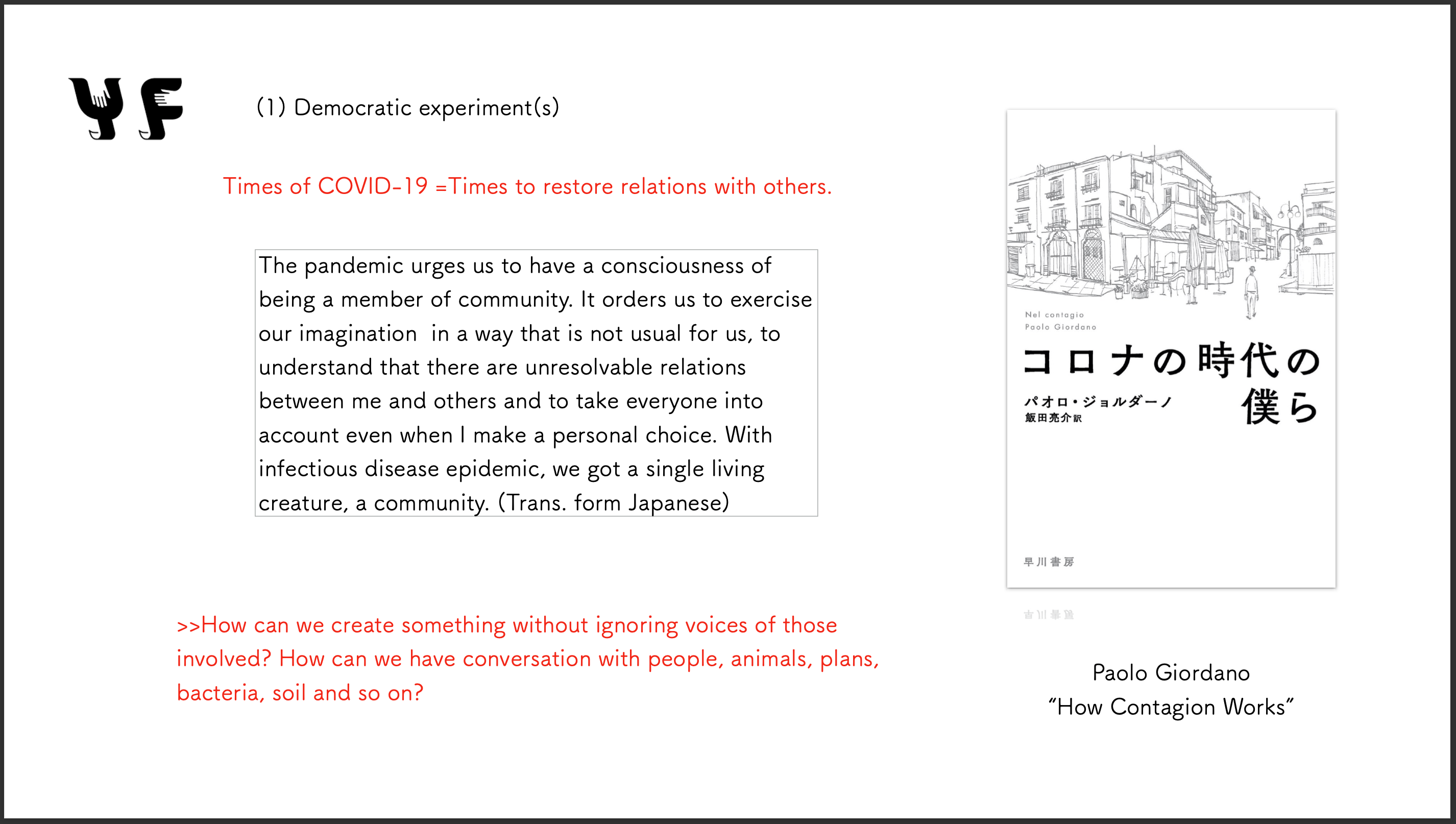 Designing the process, not the product

Cascoland, an international network of designers, visual artists, performers and academics based in Amsterdam, says their aim is to design the process not the product.

One example of an experiment they carried out used a public indoor space. When they came across a building that used to be a part of a shopping street which was no longer in use, and found out that there were residents in the vicinity who were willing to start a shop but couldn’t for financial or other reasons, Cascoland opened up a one day shop so people could take turns to try out their shops. Different activities took place every day, including ones by hairdressers and masseurs.

Hairdressers and masseurs must be physically intimate with their clients, and therefore their activity is not simply an economic activity but also a social one. They closely engaged with their clients and heard about their personal lives, creating what Cascoland called “an informal community of care”.

Furthermore, since bread waste in the area was attracting rats, the community decided to gather this material to generate gas using the “bread digester” they had developed to bake bread, enabling them to utilize bread waste as fuel for neighborhood activity.

Cascoland says it is important to carefully observe the site and to place the project where actual action is taking place. It is also important to remember that this action is not one-off but rather comes in a sequence, and is practiced by numerous participants. “What we often say is that we don’t aim to design products, but to design processes,” says Roel from Cascoland. 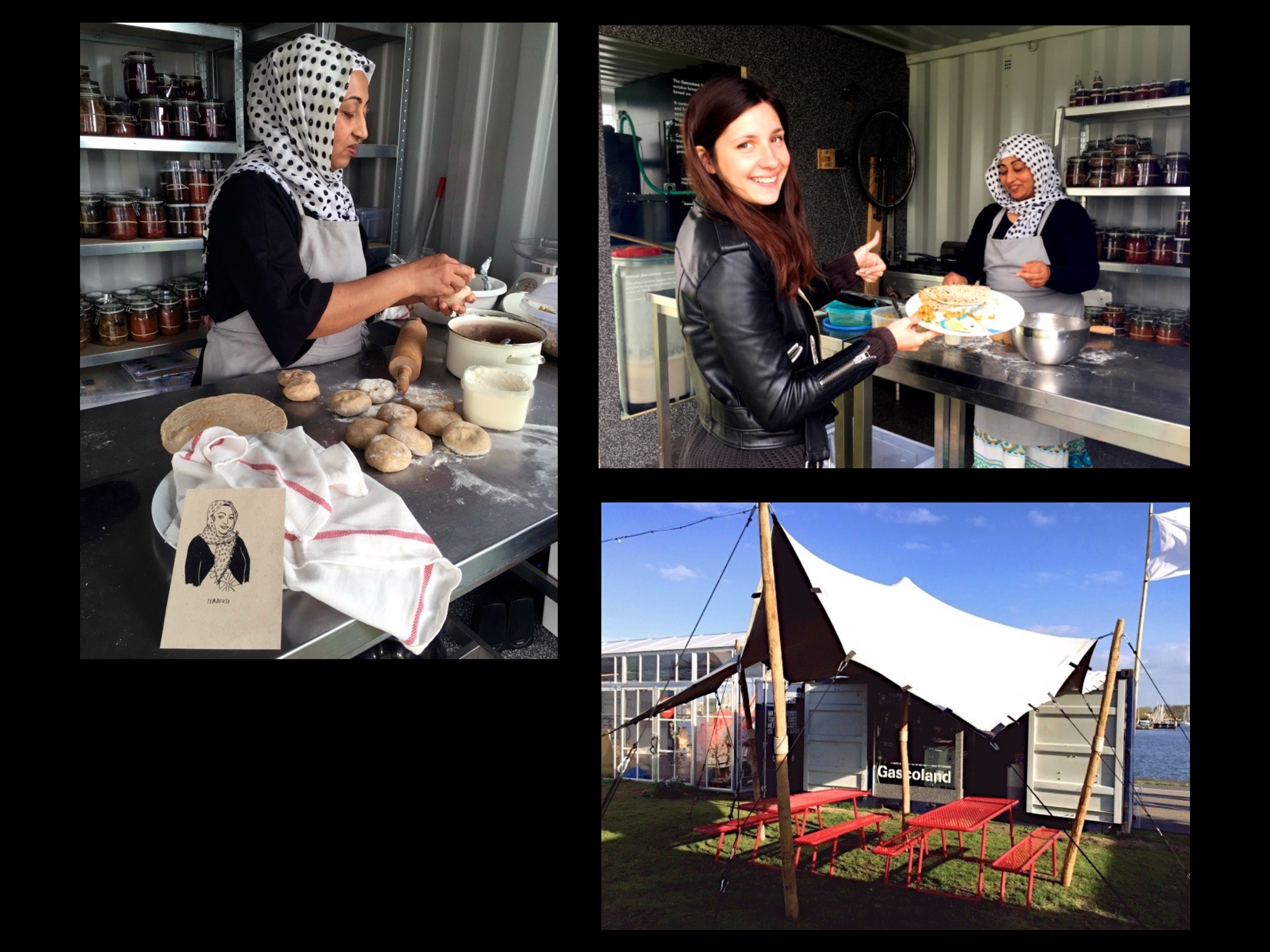 “an informal community of care”

Fiona: Listening to Asa’s presentation, I was thinking how many things become visible at a time of crisis — when there is a lack of formal system, the bottom up approaches, the informal systems and the power and beauty of them become visible.

During the pandemic, we realized how important connection was because there was a lack of it, and its value became more visible.

Roel: There are many things to learn from crises, including the economic crisis we experienced in the past 20 years. The government was retracting but creatives and residents instead stepped into creating a bottom-up public space. This ongoing pandemic is another challenge, and it taught us how important public green and public spaces in our cities could be so people can resort to them.

Tim: Right, I see. I would like to now talk about the role of creativity and art, in terms of how they engage with the different stakeholders in our society. Asa, what do you think?

Asa: That’s a difficult one. I think art plays an important role in empowering us when you face anxiety. By creating something, you are able to craft something concrete from this dark, intangible anxiety, and you will be able to find out what other things there are to do.

Roel: I believe that artists, creators and designers can bring different perspectives and inspirations that were overlooked, to bridge different resources of different groups and different communities. This change in perspective can open up new ideas and processes.

Tim: Thank you. Now to Asa. Could you please tell us the figurative interpretation of how we can build democracy through the process of creation, which you have mentioned in this article?

Asa: In order to create something with a spirit of democracy, we need to invent a new language. In most cases, the common language is made for the majority and hence not suitable to express the minorities’ situation.

For example, people say “nice to see you” — but blind people can’t see. So I think being conscious of the language you use everyday could be a starting point.

Tim: Right, thank you. Now, last but not least, what do you expect from the potential entries for this year’s YouFab Award? Asa, can you start?

Asa: So this year’s topic is very big and global, but I am interested in the local solutions. I’d like to know who the stakeholders are and what is the best choice for your community.

Roel: I would say the challenge is to expect nothing, so we can be surprised by the unexpected that we can encounter. If that makes sense.

Some of the most important elements based on the discussion from this day were “listening to ‘others’ with intention”, and the “need to invent a new language”, which might be addressed by some of the applicants.