Acknowledged international expert and pioneer in the field of arts, scientists and technology, Ariane Koek, and Alex Ikenouchi, the director of Panasonic’s corporate showroom “Panasonic Center Tokyo”, which will be bestowing this year’s YouFab 2021 special prize, held an online event on September 3 to dive into this theme.

YouFab started in 2012 when digital fabrication machines such as 3D printers and laser cutters were just starting to emerge, with the aim of educating people the possibility of digital fabrication and the technology itself. Digital fabrication has greatly expanded in the last decade, surpassing borders and realms, triggering YouFab to further explore areas and becoming an international art award.

As we continue to embrace the boon of digital fabrication, YouFab will be soliciting works again this year as a global platform to connect creators and the society.

For this year’s special prize “Panasonic Prize”, YouFab will be soliciting creative ideas and technologies that will “energize the world and make our lives ideal” under the theme “Democratic experiment(s)”.

Selected works may be invited for special exhibition at the Panasonic Creative Museum “AkeruE”, or for joint research with Auglab and Panasonic Laboratory Tokyo.

The online event started with presentations by Koek and Ikenouchi.

In her presentation, Koek introduced the art program which she had worked for in the past.

Koek, founder of the Arts at CERN* program in Geneva, which serves as a place of “creative cohesion” between scientists and artists, says these encounters are the exact key for people to cross boundaries.

More than 12,200 scientists from 110 different nationalities work together for a common goal at CERN — to find out how the universe was created. She says physicists and artists are in a way “twin souls” because they both look at how and why the universe came into existence, and think beyond paradigms to obtain further knowledge.

As Einstein once said, “knowledge is actually limited and imagination embraces that entire world.” Koek finds joy in using her creative process and imagination to see beyond the limitations through various projects. 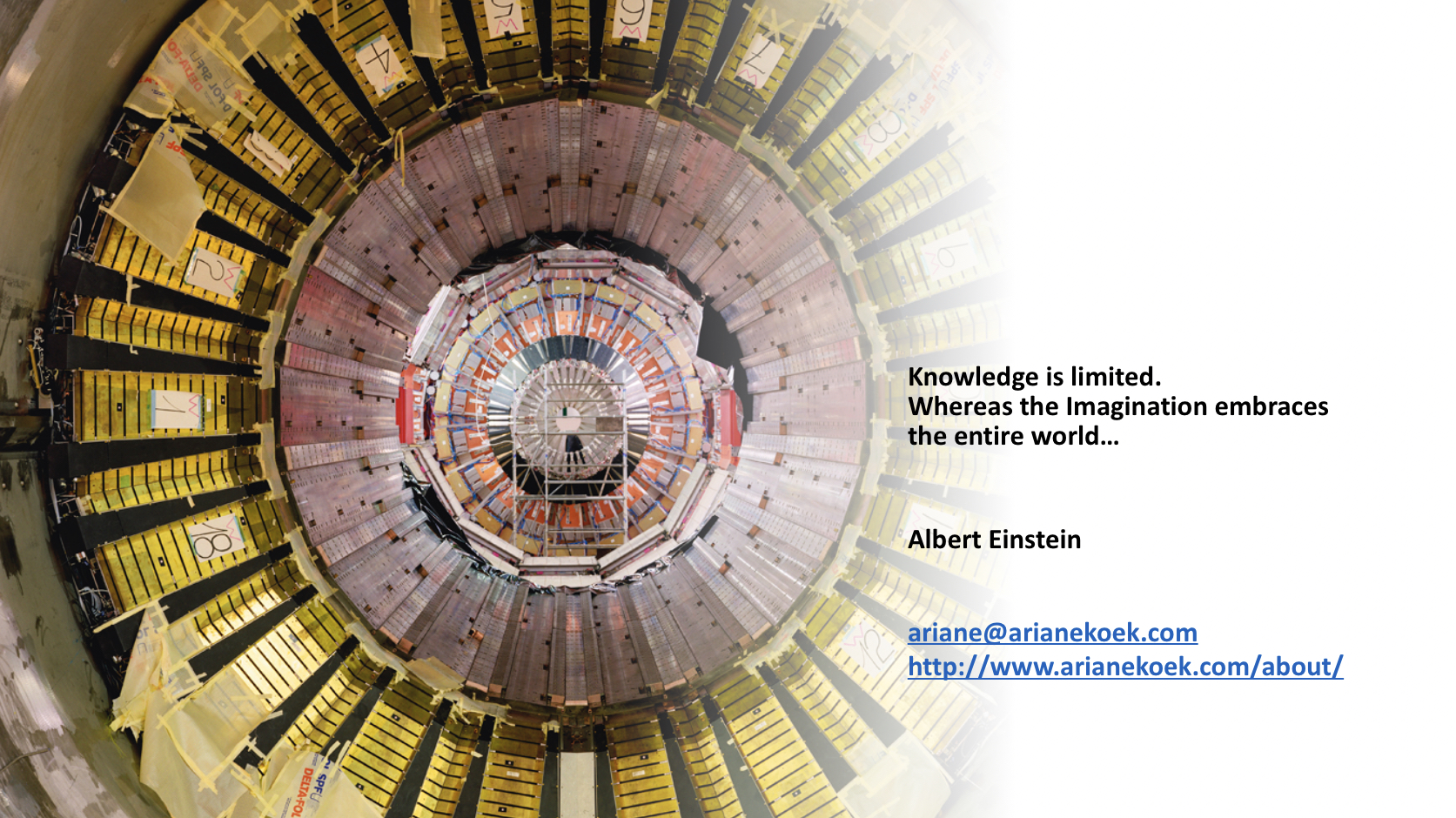 "knowledge is actually limited and imagination embraces that entire world.”

Making the People Before manufacturing Product

Alex said that Panasonic sympathizes with this year’s theme “Democratic experiment(s),” as it believes it must work with various stakeholders that are not just humans but the entire universe — which includes the global environment and energy — to realize its philosophy: “to make life and society ideal”, especially in this ever-changing world.

When Konosuke Matsushita founded Matsushita Electric — which later became Panasonic — he said that the enterprise was a “manufacturer of people” that also makes electric appliances. This philosophy has driven Panasonic to create an educational facility that is particularly designed for the future generation.

In his presentation, Ikenouchi explained about AkeruE, a creative museum that is managed by Panasonic Center Tokyo.

AkeruE is a facility based on the concept of nurturing creativity and STEAM (Science, Technology, Engineering, Art, and Mathematics) education. The concept of the museum is to “give shape to inspiration,” providing not only input but also output through hands-on activities. As Professor Resnick of the MIT Media Lab says, Ikenouchi believes that the “key to children’s future happiness and success lies in their creativity.” 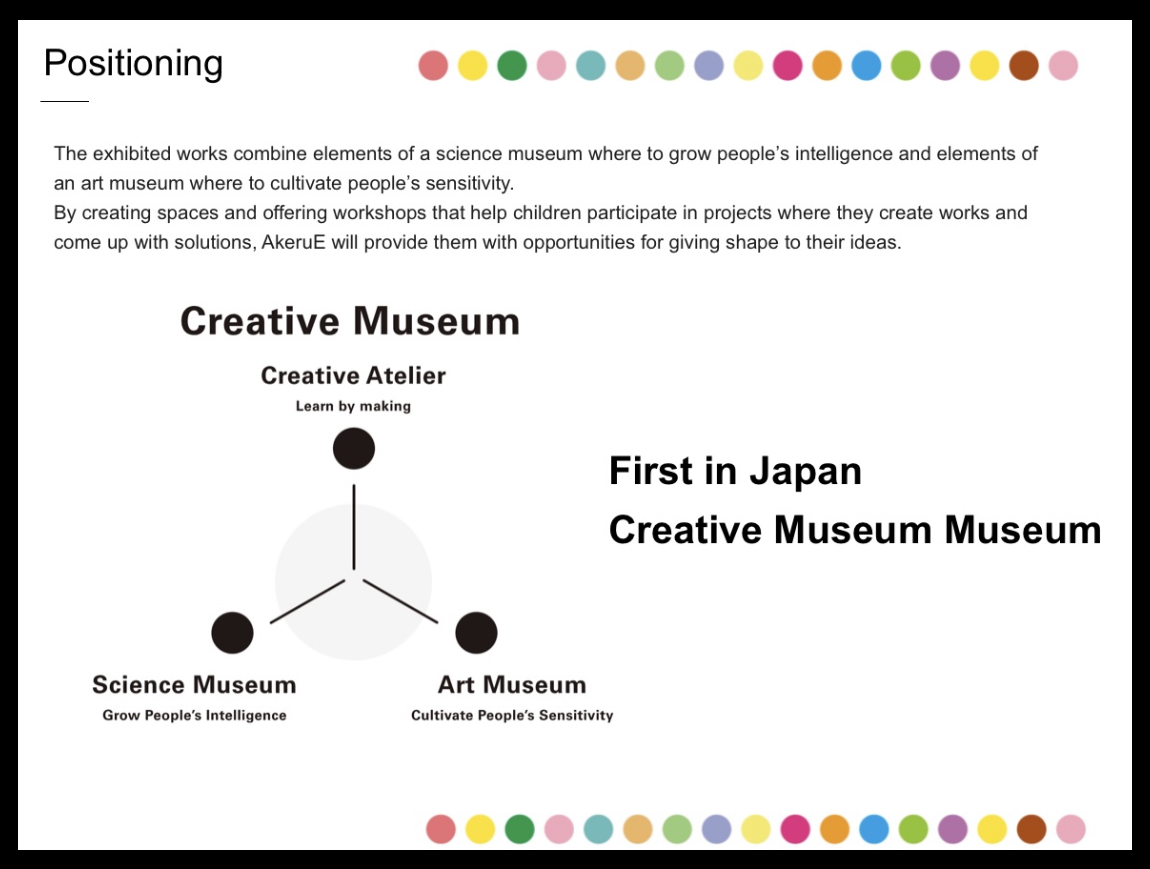 AkeruE, a creative museum that is managed by Panasonic Center Tokyo

Kelsea: So Ariane, what did you think about the presentation?

Ariane: I was able to resonate with what the founder of Panasonic said, about manufacturing people. I always say that the art program we provide is not an art program but more of a cultural exchange program. It changed the perceptions of the scientists, the people and the community within the laboratory.

The people at CERN are trying to find out how the universe was created, but there would be collisions between the artists and scientists. Scientists would complain that the artists were wasting their time because they’re so focused on data and their methodology. However, when science and art are united under a common belief, they can change people’s sense of values. At CERN, the work of artists also provided an opportunity to engage in dialogue with scientists and to inspire them that the world is not only about science, but also how non-science activities form and contribute to the world.

Kelsie: I recall you mentioning in a podcast that at CERN, artists are not required to generate output, but instead focused on the process itself. Is there a reason why you decided to pivot the program in that way?

Kelsie: Thank you. Now I would like to ask both of you, what does making things with integrity mean to you? This comes from Asa Ito’s statement for this year’s theme.

Ariane: I also believe that heartfelt creation leads to integrity. At the same time, you also have to think about the implications for everybody or everything that is being involved through the creation.

Kelsie: Thank you. Now, how do you connect this year’s YouFab theme, “Democratic experiment(s)”, to your own experience and work? Furthermore, what do you consider are the most important elements for this?

Ariane: Physics says everything in this world is created of particles, whether it be this chair or my hair, and that there are mini-explosions going on our own bodies which recreate the moment when the universe was created. Flashes of light occur when matter and antimatter meet inside of us. This already tells us that everything that exists in this world is all connected and interrelated, whether they are sentient or not, and I believe democratic experiments is to be aware of this fact in whatever and whenever we create.

Alex: I believe the manufacturing scene has been changing recently because nowadays anyone can be a manufacturer thanks to technologies like 3D printers and the Internet. Thinking, discussing and trying out how manufacturing should be is important for us.We also have to remember that when you consider the stakeholders, thinking about only humankind is not enough. We must contemplate the global environment and stakeholders that are not only humans to realize a better life and a better world for all related stakeholders.

Kelsea: So the question is, how do you make decisions, or overcome friction between various stakeholders during the creation process? How can we think about the non-human stakeholders in this process?

Ariane: In order to overcome friction during the creation process, it is vital that you emphasize the common goal so people can be united and their curiosity ignited or rekindled. It’s always about communication and the common goal.

Regarding the non-human stakeholders, we have to embrace and think about time and the effects on the planet when we make technology. We have to think about how it can be reused and recycled, too. We have to be aware of those deep time implications as well as material implications.

Alex: Since people with different backgrounds naturally have a different opinion, it is difficult to set a common goal. So we always go back to our company philosophy and ask ourselves, “Is this contributing to our society? Improving our lifestyle and cultivating our culture?”

Kelsea: Great. So my next question is what is the most important thing about using our imagination to create something new?

Ariane: I always think imagination is a superpower that humans have, and the important thing is to allow it to take you further than you’ve ever dreamt of.

Alex: I personally think that imagination is important in order to gain a different perspective or change the one you have.

Kelsie: Thank you. Now finally, do you have any message for the creators who are considering applying to YouFab this year?

Ariane: I assume the applicants are thinking about things like how we can connect better, or how we can become better communities. Technology does help to a certain extent, but can there be a way to improve that and to create much more? “We” rather than “me” is also a keyword. I also would expect the applicants to think about the implications of every material they’re using, and its effect on the environment, people and non-human stakeholders, time and space.

Alex: Since AI and robotics are the themes of Panasonic’s R&D Team, which is in charge of this year’s YouFab special award, is working on, we expect works that utilize these technologies and other interesting ideas. It would also be nice to see works that explore human’s psychological well-being and mindfulness, or things related to creative education.

In order to coexist with not only human beings, but also the entire universe in this ever-changing world, we need to reconsider the nature of manufacturing, use our imagination to transcend boundaries, and repeatedly overcome conflicts among stakeholders. Democratic experiment(s) may be a new indicator of the manufacturing process.