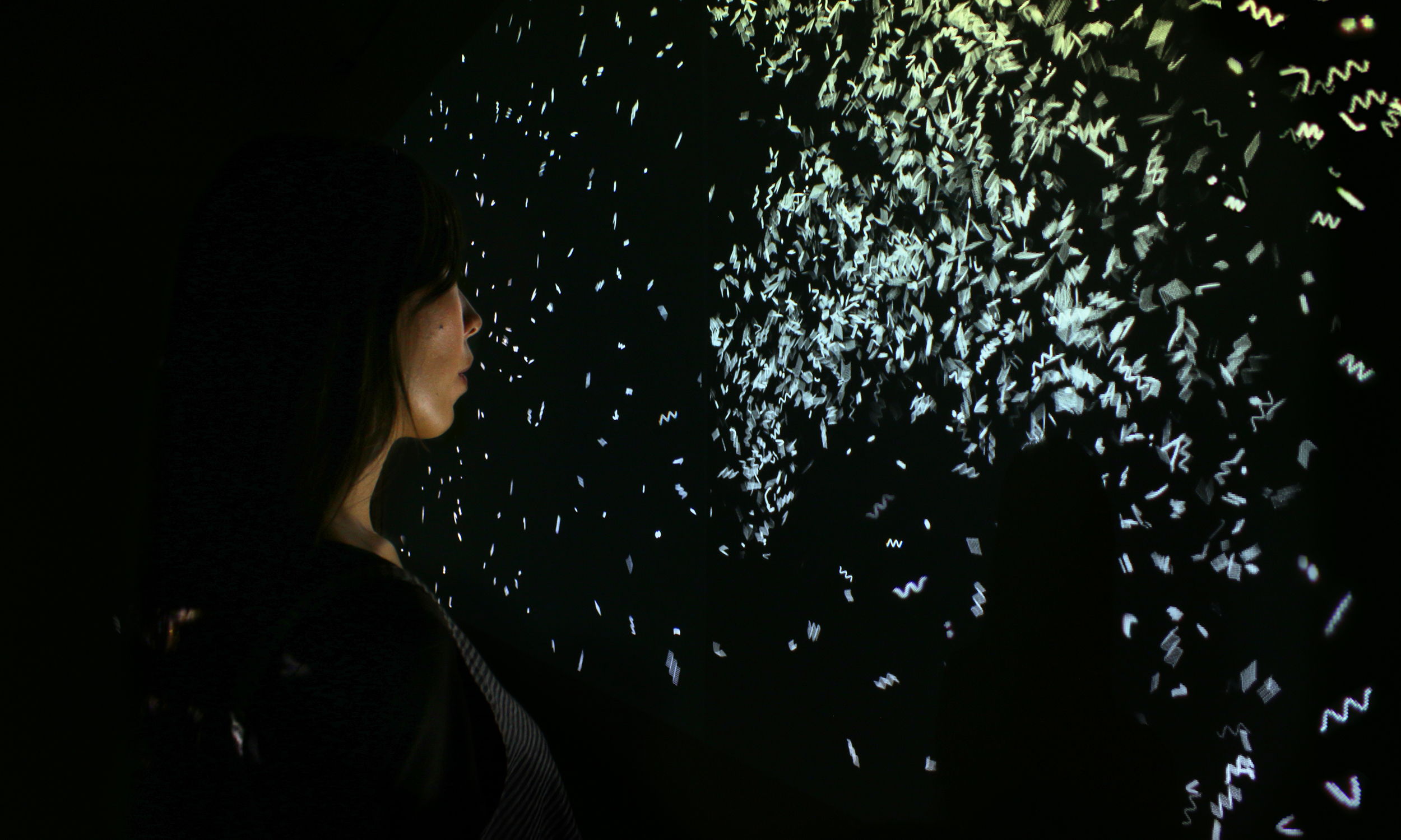 We release 37 million microbes per hour from our bodies; this is called the microbial plume (Yale, J. Qian).

Plumial Space is an immersive installation, where the audience is invited to experience simulations of their microbial plumes. Prototypes of wearable artefacts are presented alongside this, embodying personality archetypes of a speculative future scenario exploring the microbial plume and its possible cultural interactions.

The microbes that make up our microbial plumes are so unique to each of us that scientists are currently developing ways to identify people using them.
This project presents a future where technologies of microbial plume identification have become part of the everyday. New modes of self expression and behaviour emerge. Different personality archetypes alter their way of dress to help them contain, spread or invite microbial organisms into their bodies. A more complete explanation of the archetypes and how they dress can be found further down this text.

This project also begins to reflect different ideas about how we understand ourselves or relate to others and the environment. Every single being, including you and I, exist beyond their bodies, expanding to the environment through layers of biodiversity. The individual becomes a superorganism, only capable of existing due to the millions of parts within the group we all belong to. Collective social behaviours emerge through how our microbial identities are shared – viruses, bacteria and other microorganisms. We might be disconnected, but far from being alone.

This project was the outcome of a 4 months Design Residency hosted by Fashion space Gallery and part of Arcade East’s summer programme, which focused on Sustainability and Innovation.

Archetype #2 – Spreaders
Spreaders aim to distribute their microbial plume into everything and everyone. They want to be sure that everything and everyone retains a part of their identity. They use wearable artefacts that facilitate the spread of their microbes when they open and close their arms. These wearable artefacts have perforations designed into the fabric, so the microbes are released far and wide..

Archetype #3 – Deceivers
Deceivers are interested in taking on the microbial plume of others they come in contact with. They like to try on different identities, unsure of what might be the best outcome. Deceivers use wearable artefacts designed to invite others to take part in a microbial plume exchange. The artefact can be lifted to invite others to stand inside the grooves. Microbes from participants are collected on the surface of the artefact. Microbes are then collected for growth. And transferred onto the body of the Deceiver to change their microbial plume. 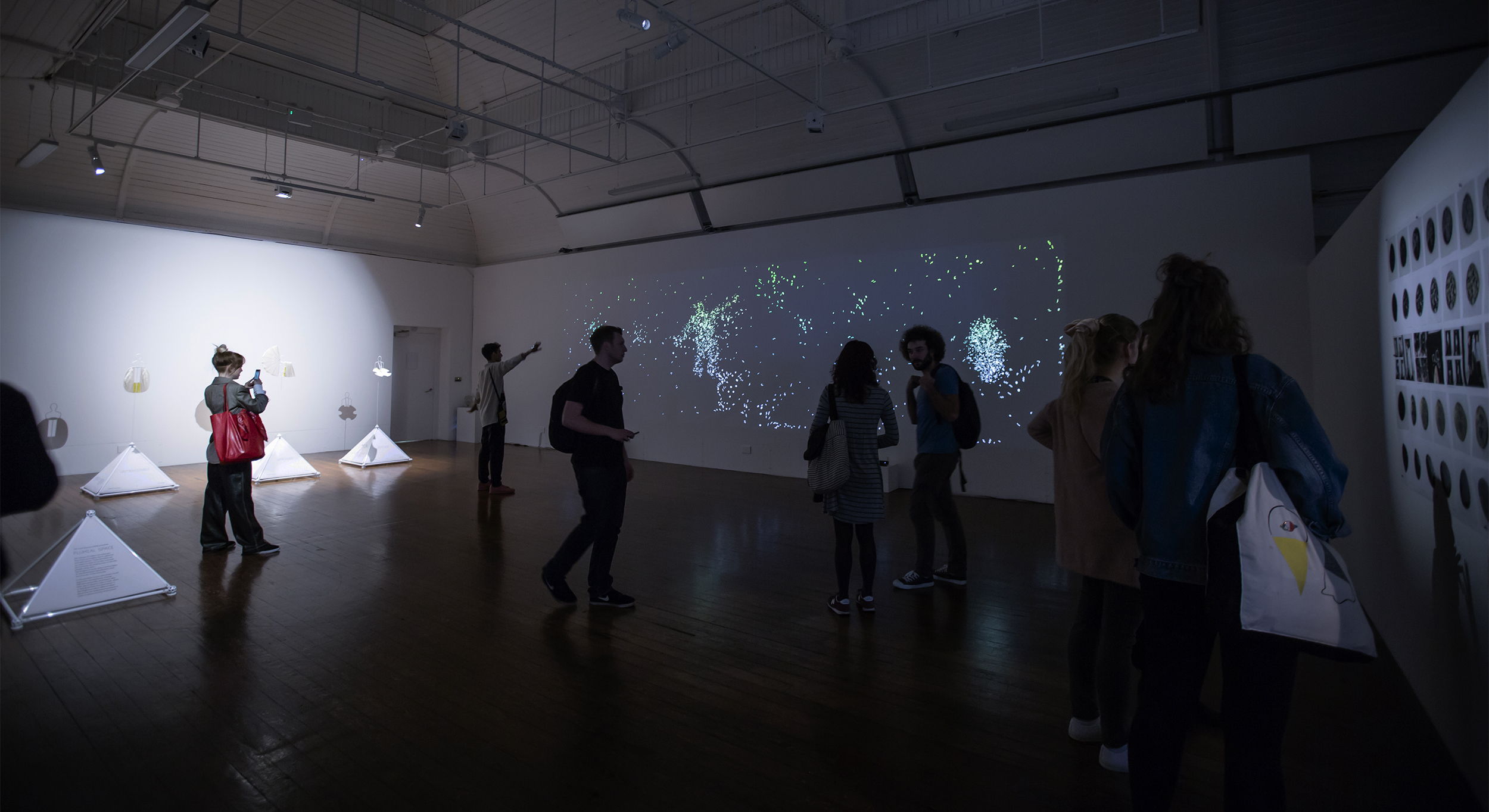 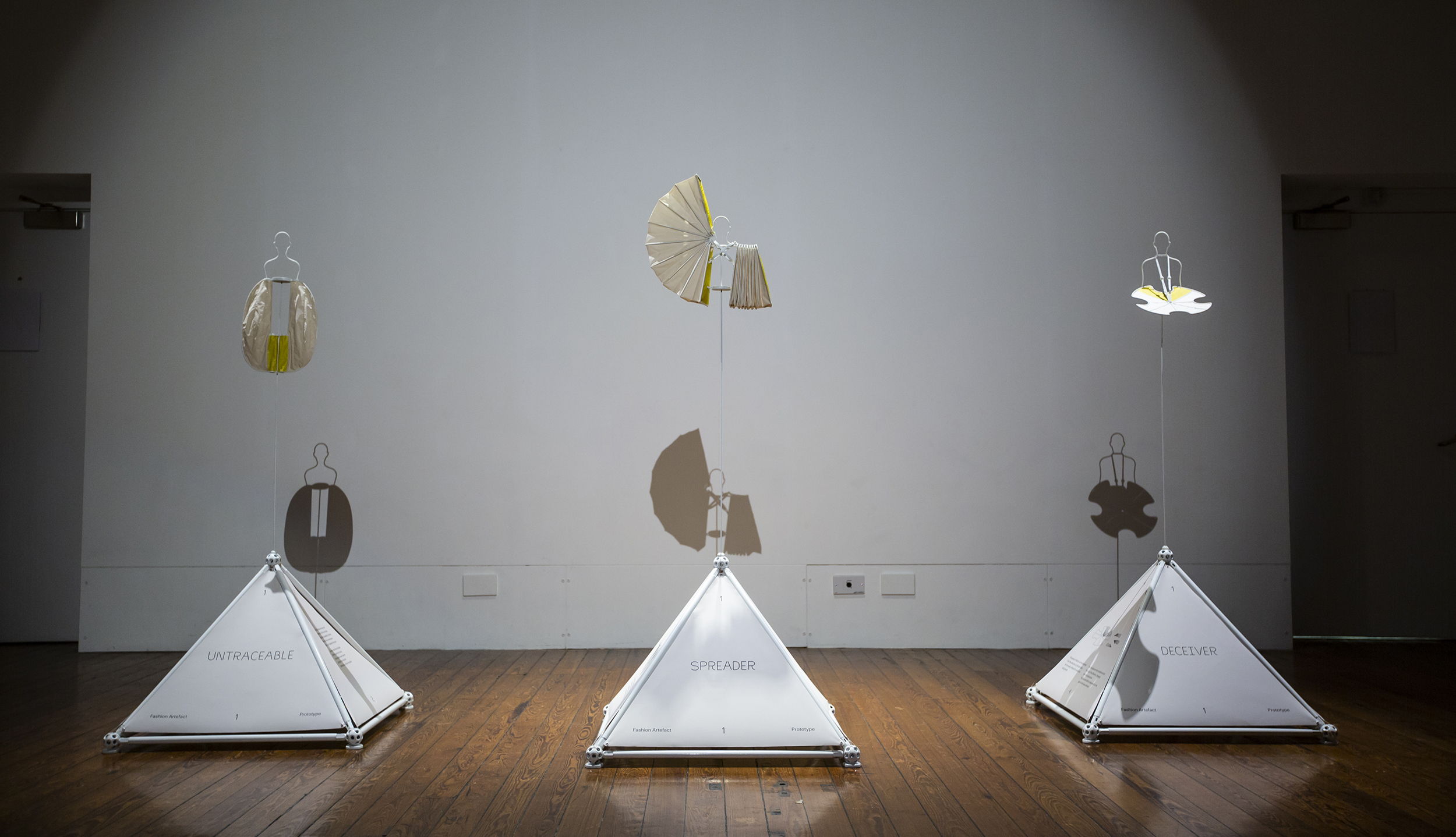 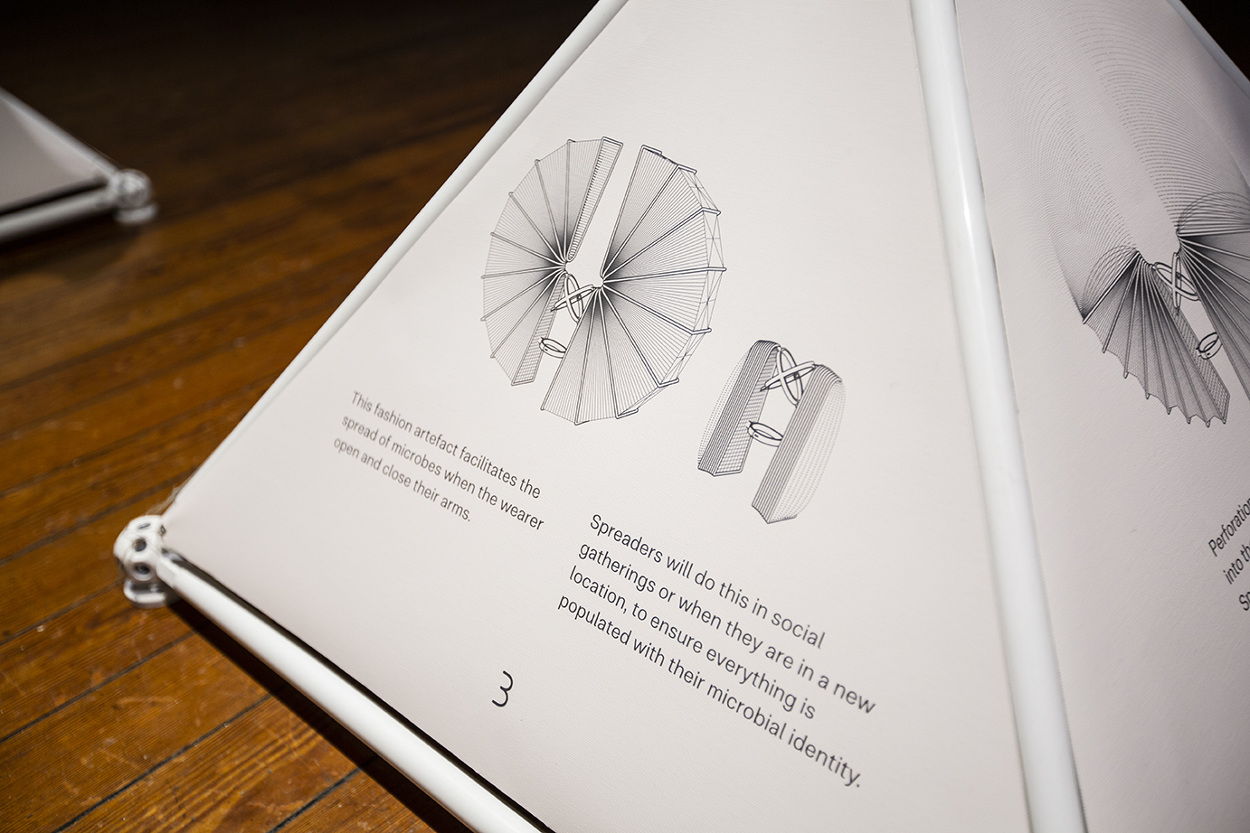 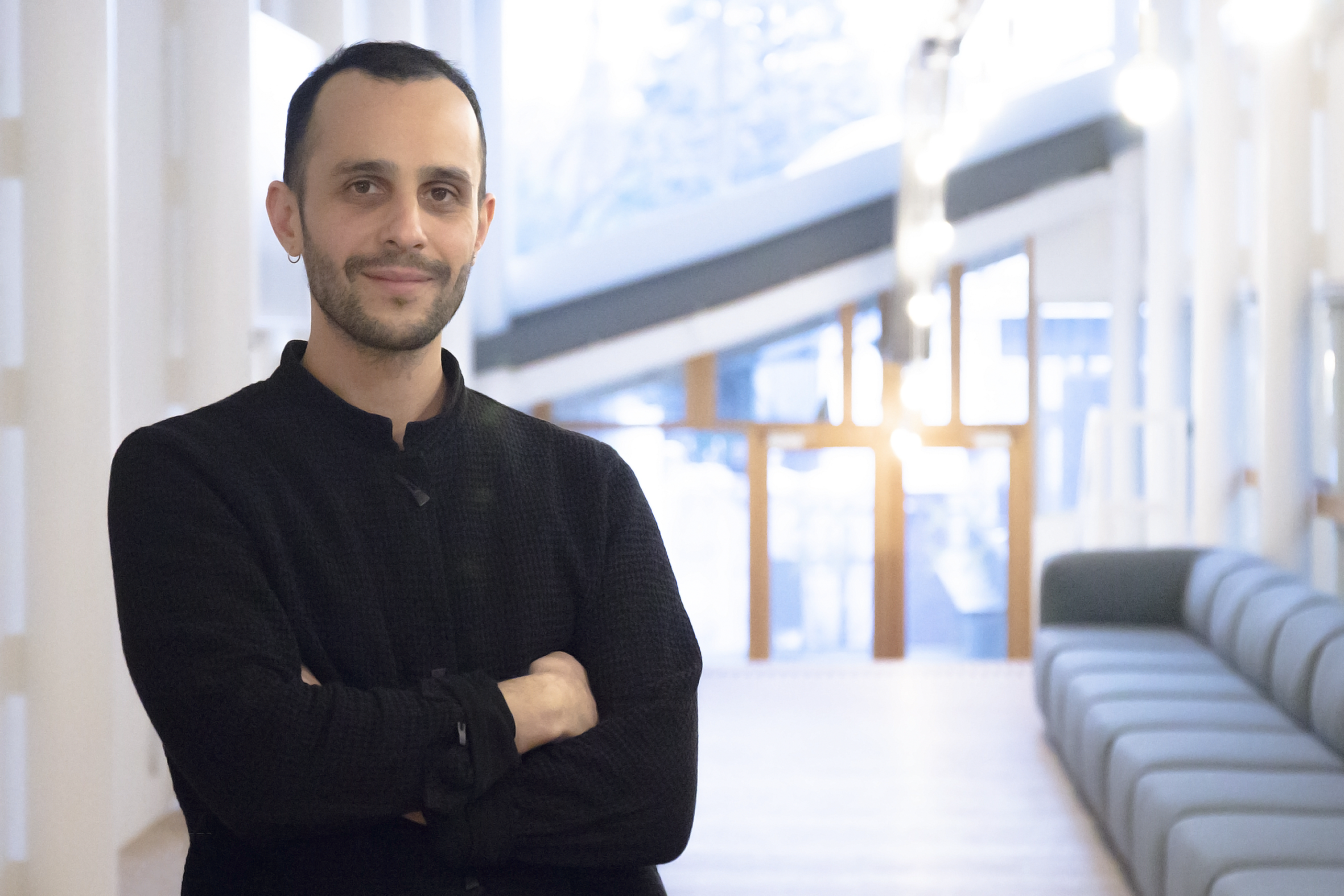 I am a Venezuelan born educator, designer and multimedia artist based in the U.K. and Portugal. My work is multidisciplinary and I often engage in collaborations with scientists, technologists and other practitioners, to promote knowledge exchange, critical thinking and lifelong learning. I hold a 1st Class Honours Degree in Design from the University of Aveiro (Portugal), followed by an MA in Design Interactions from the Royal College of Art (U.K., 2015). My practice focuses on the necessity for critical engagement with contemporary and emerging issues related to technology, ecology and politics. To facilitate this I use design fiction, speculation and world-building as storytelling methodologies. Narratives are expressed through a variety of media including moving image and prop/object design. I use these mediums to create immersive experiences aiming at involving visitors actively and critically with the narrative and issue presented. Exhibition highlights include: The Museum of Lost and Found Potential – Supported by the Wellcome Trust, London 2019; Authentic Fictions: Speculative Futures for 2.5D Printing – DLab Tokyo Gallery, Tokyo 2019; Plumial Space – London College of Fashion Arcade East, London 2018; Night school on Anarres: Imaginings of an Anarchist Utopia – Somerset House, London 2016; and Economics of Uncertainty, Future of Labor – Venice Biennale 2014.