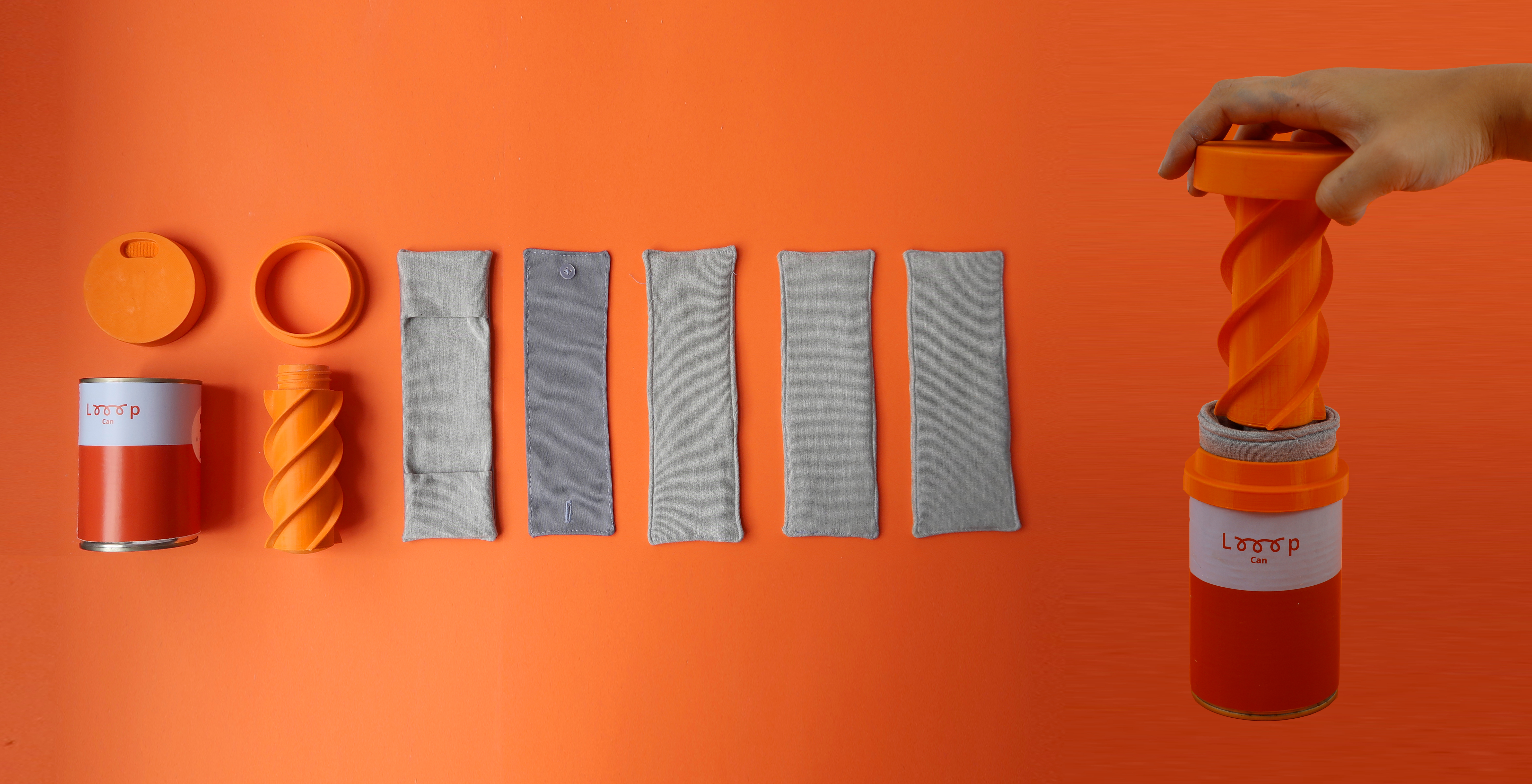 A cleaning kit for washing reusable mensuration pads. designed for menstruators in waterscarce regions or in financial difficulties or in sustainable lifestyle. It uses buoyancy to reduce the amount of water required for washing. The product costs around £3 and has a lifespan of 5 years.

Menstruation is time-consuming and costly. People spend an average of 7 years menstruating and spend around £5000-£18000 on products in managing their menstruation life including panadol pills to get rid of period pain. The result of the add-on financial burden causes period poverty when menstruation is profitable and consumed monthly and still associated with social stigma and cultural taboo. Period poverty is an inability to access or afford sufficient sanitary material due to financial constraints. We must not neglect the fact that 500 million people are still living in period poverty and given that people from a weak economic background use homemade blood-collecting substitutes to manage their menstruation, such as tissue paper, socks, newspapers, unhygienic clothes, pieces of mattresses, rags, leaves, ash, goatskin, or even cow dung. This leads to an increased risk of reproductive and urinary tract infections and also immobility due to the association with embarrassment, fear, and anxiety of blood-leaking. I came into the gender justice consciousness by knowing people who suffer period poverty regarding their social-economic status, class, age, ability, race, and gender.

With the rapid climate changes, at least 26 million people are forced to flee away with a fear of being involved in war owing to resource scarcity. The refugee crisis is one of the gravest humanitarian disasters and women suffer more vulnerabilities in this insecure journey such as widespread gender-based violence in the camp. Especially period poverty is overlooked in refugee camps owing to the lack of data collection about menstrual health. This affects their ability to move freely and access opportunities such as education or fetching water and food resources. Plus menstruators change pads in their shelter though there is no privacy rather than in a shared toilet as it is dirty and unsafe. They need to have privacy, safety, security space and access to water and soap to clean. The minority of them who did not struggle had either finished their period or consistently relied on charities for period products. Asylum-seeking menstruators are another marginalised group in terms of access to period products.

Hence, Looop Can is a cleaning kit for washing reusable menstruation pads for reducing period poverty in water-scarcity regions. Knowing almost 60% of female refugees suffer period poverty problems as they rather spend financial support on food or baby diapers. Most of them come from strictly religious countries that see inserting tampons as taboo. This inspires me to design a product that can protect fundamental human rights to water, sanitation, and health for menstruators from 12 to 24 years old, who suffer language and culture barriers and have limited financial ability.

To use Looop Can, first, you add the used pad in. Then you add the baking soda stored inside the container and add water until the level where the packaging indicates. Baking soda is a natural cleaning detergent to help remove blood stains. Screw the cap, immerse the screw container and spin to mix the baking soda and water. Buoyancy Force is used to reduce water required for washing, and the gyroscope spinning mechanism allows less human effort so that people who have period cramps can wash easily. Wait at least 30 minutes until the period blood disintegrates, then use the container to scrub the bloodstain. Rinse and scrub 3 times and one pad can be cleaned with just 500 ml of water. Washing water can be discarded into the natural environment since period blood and baking soda are compostable and harmless to the environment.

Instead of creating a completely new kit out of scratch, Looop Can uses recycled steel cans so that the washing container is easily replaceable. Most modern steel cans for food are given a hermetic plastic coating on the interior, which is used to protect the content from damage such as scratches or dents. Recycled PP is used to make the washing parts. With injection modelling, the total cost is around £3 for the whole set including the washing parts and pads. My pad’s design uses bamboo terry as the contact layer, bamboo fleece as the absorption layer and PUL as the leakproof layer as they are anti-odour, anti-bacterial and eco-friendly, which makes them less likely to cause skin allergies. The pad takes half a day to dry indoors. A rectangular-shaped design reduces waste from the fabric off cut.

The Looop Can be a stepping stone to promote hygiene awareness campaigns in the refugee camp. Refugees who join the 30 minutes menstrual hygiene management session can get 2 units of Looop Can as it makes sure that they learn how to use it properly. It also reduces gender-based violence as users don’t have to risk going out to travel long distances at night for toilets. This will be a tool to fight for better gender equality in water and sanitation access and restore human dignity. Especially reducing period stigma in water scarcity regions such as Jordan, Lebanon or Ethiopia. Hope that one day, there won’t be any heartbreaking period poverty news in the world.

LooopCan_5minsPresentation.mp4 from Kara Wong on Vimeo. 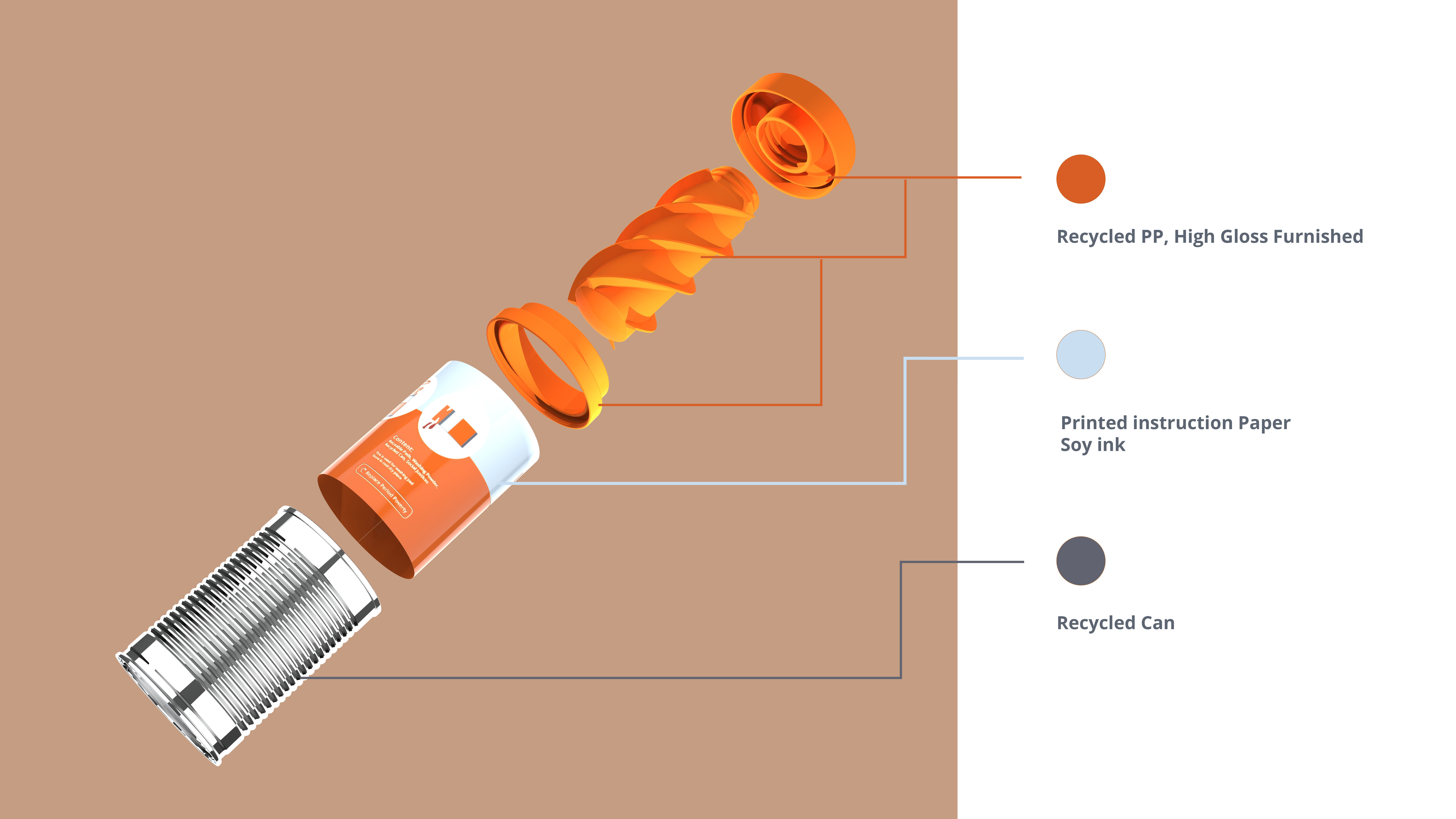 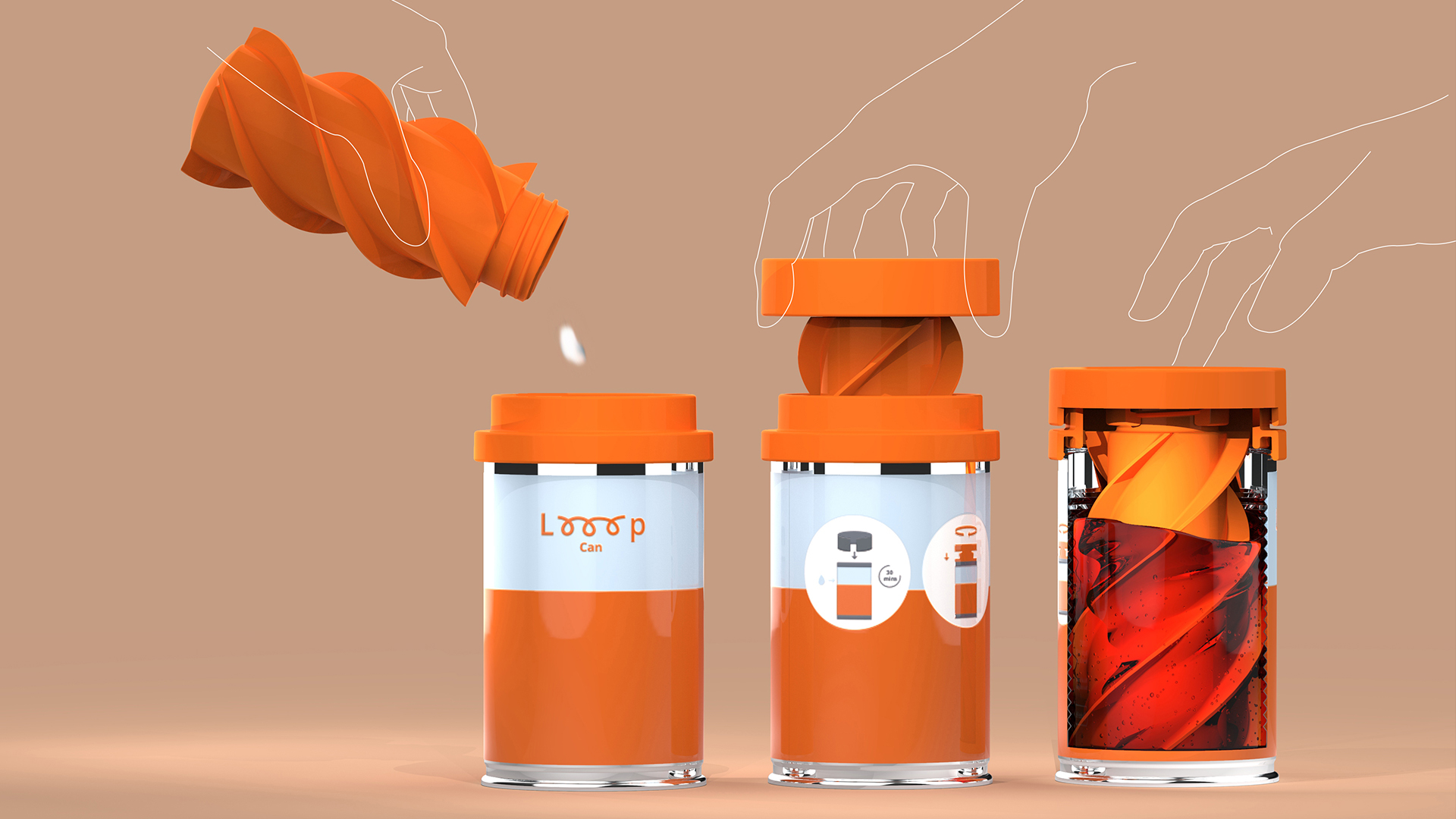 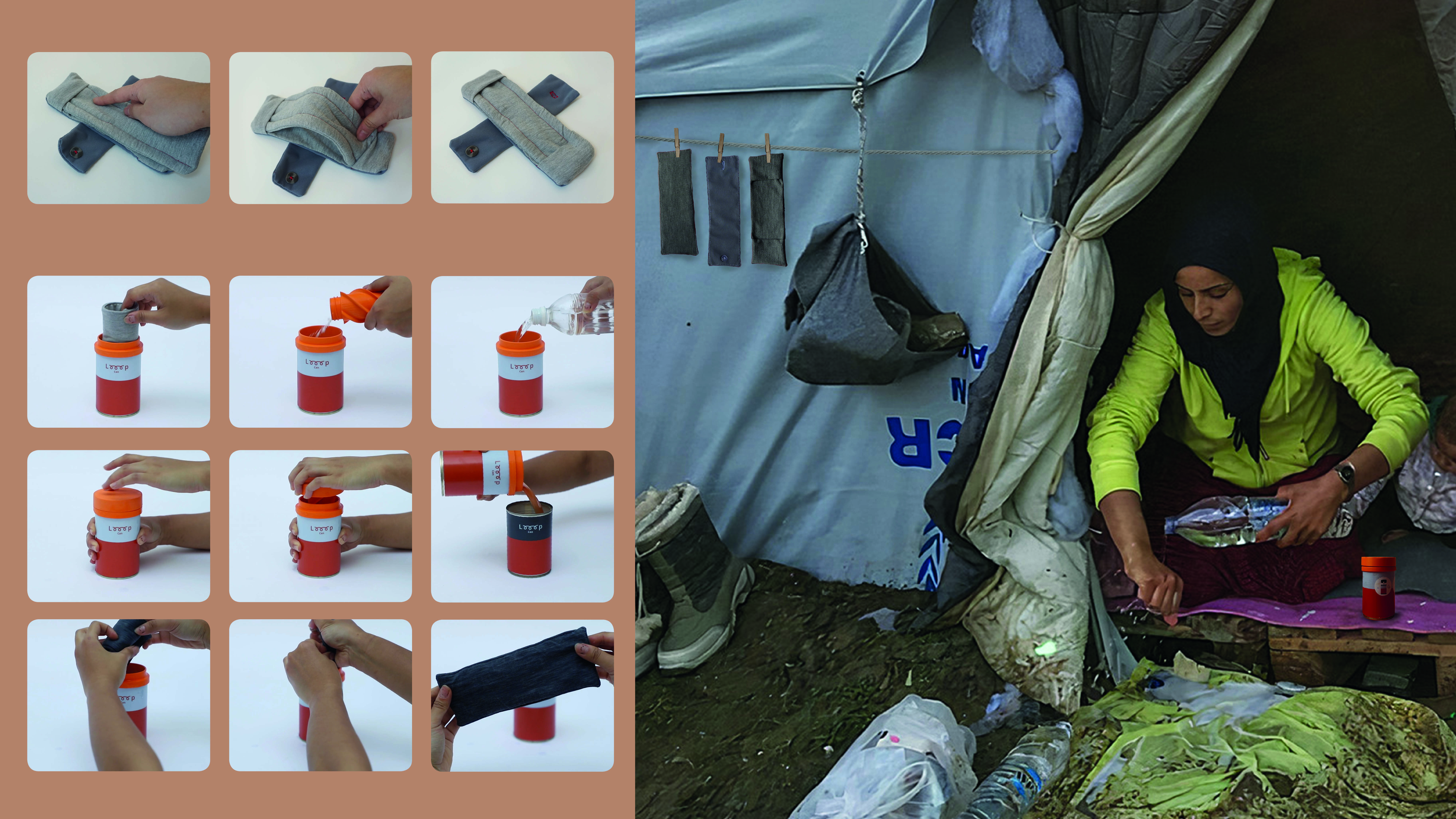 Cheuk Laam Wong is an award-winning London-based product designer originally from Hong Kong. Her main design philosophy focuses on affordable social design that brings long-lasting positive emotion to vulnerable communities. This led her to a design journey that protects fundamental human rights to water sanitation & health. She is also a keen UX designer who not only designs beautiful interfaces but is passionate about democratising knowledge and bringing incentive to learning.

She graduated from Central Saint Martins with a first-class honour in BA Product Design in 2021, where she developed Looop there for menstruators living in period poverty and suffering financial difficulties. She co-founded Waveee Design with RubyMaky to bring social impacts with multidisciplinary design works after graduation. In Waveee Design, sustainability development serves as a guiding role in decision making about material selection, system service, manufacturing method, and community involvement. It is an honour for Waveee Design to join the journey to end gender misinformation by bringing marginalized people participation in economic activities together through design.