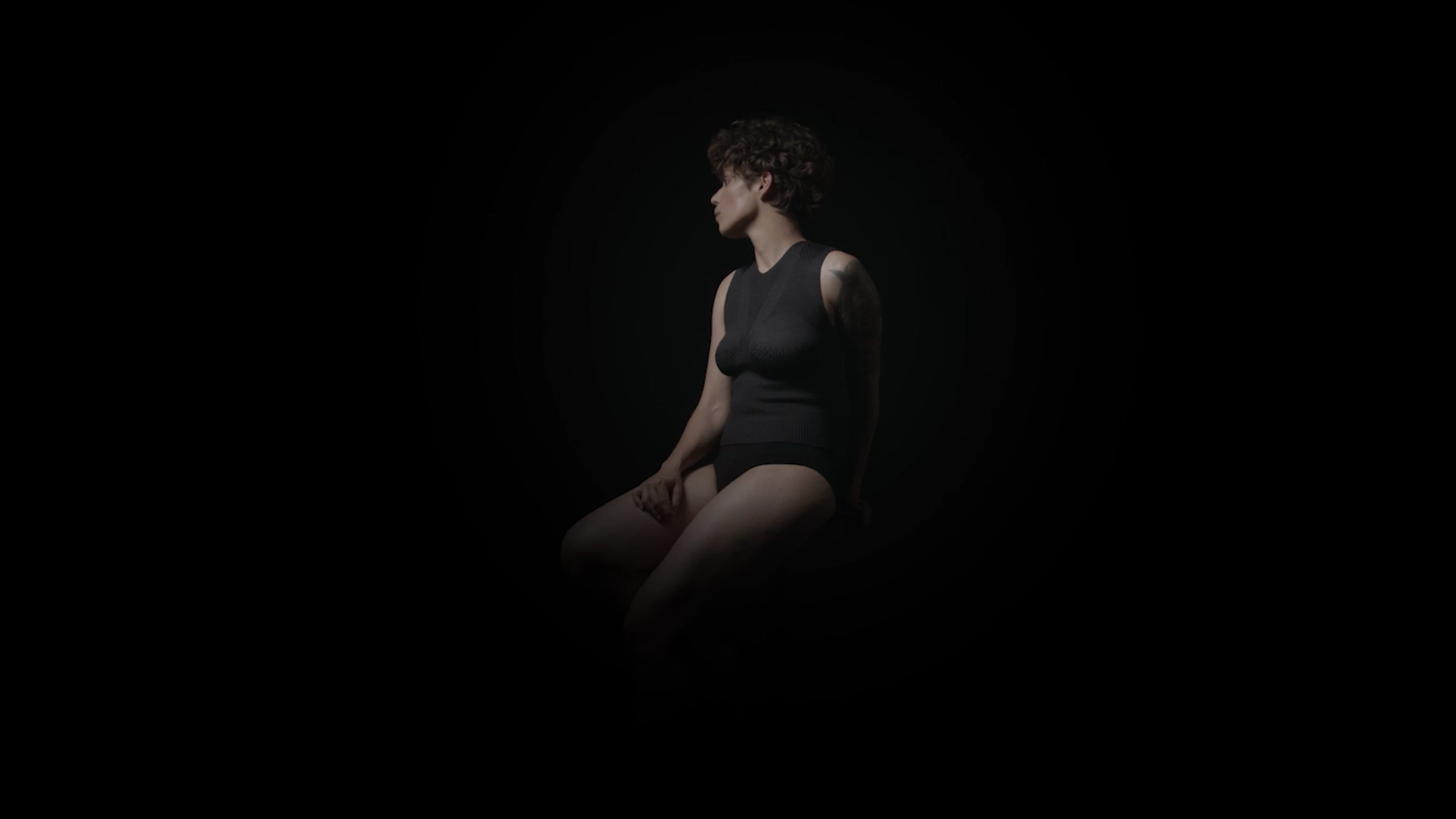 – how can a garment support female breasts, embrace their individual shapes and asymmetries and blend the divide between underwear and clothing –

’embrace’ is part of a larger research investigation that diversifies design processes and welcomes the garment wearer as a stakeholder and expert within the clothing design team. A speculative alternative to the conventional bra has been conceptualised and prototyped, inspired by the collective needs of females affected by breast cancer, including the needs of females living with different-sized breasts, one breast, or no breasts after a mastectomy. The bra alternative design development opposes normative garment construction based on body symmetry by responding to specific clothing needs and unique body topologies of females affected by breast cancer. This approach to clothing design proposes expanding the general understanding and interpretation of breast support by introducing garment modularity, mass-customisability and blending the gap between underwear and clothing. By working with additive manufacturing processes, such as 3D engineered knitting, with parametric design methods and modular clothing construction, this approach makes designing for individual, physical and aesthetic needs accessible.

I came to the subject of breast cancer and clothing design through a friend who spoke to me about her difficulties finding aesthetically pleasing and comfortable bras after her breast cancer diagnosis. While listening to her experiences with current post-mastectomy bras, prostheses, altered self-perception and redefined femininity after her mastectomy, I wanted to investigate how the current post-mastectomy bra selection was experienced by other females affected by breast cancer. And I wanted to learn how I could be of use to these females in my capacity as a clothing designer.

Breast cancer can be described as a modern epidemic. According to the World Health Organisation, one in eight females will develop invasive breast cancer in their lifetime worldwide, with an average 80% chance of survival. Case numbers are predicted to rise by 50% until 2030.

For most diagnosed females, breast cancer treatments include some form of mastectomy, which encompasses the full or partial removal of one or both breasts. Nearly half of all patients undergoing such surgeries will not reconstruct their breasts and continue life with different-sized breasts, one breast or no breasts.

Post-mastectomy bras are the type of underwear that is offered to females after mastectomy scars have healed.

These garments are worn as an everyday bra in conjunction with external breast prostheses, which are gel-like, silicone forms inserted into the bra’s frontal pockets.

Each breast cancer diagnosis and personal experience with the disease is unique, and therefore the specifics of individual bra needs vary. These needs depend on the personal, physical and emotional healing processes. On the physical level, specific post-mastectomy bra needs can be affected by surgery scaring, skin sensitivities, damaged nerves or lymphedema. On an emotional level, self-perception and (re-)connecting with an altered and traumatised body is an intimate process that can create its own set of unique bra needs.

There are currently few alternative bra options in the global market for females who live with different-sized breasts, one breast, or no breasts after a mastectomy and do not wear external breast prostheses.

Conventional post-mastectomy bras are symmetrical and cater to a stereotypical and symmetrical body shape that aligns with industry standards and manufacturing techniques. Industrialised patternmaking methods are similar for clothing, underwear, bras and post-mastectomy bras. They are generally based on normative measuring charts that transfer summarised, categorised and standardised body data into universal measurements. These calculations assume body symmetry as a base standard from which normative sizing charts are built. Pattern construction techniques are reliant on these methods. Females whose bodies are no longer symmetrical after a mastectomy or individuals whose bodies structures deviate from the norm in other ways are not considered within this approach. It can therefore be difficult for these individuals to find market available clothing according to their specific needs.

To better understand the specific bra needs of females affected by breast cancer, I developed and facilitate participatory design sessions within my PhD research. Participating females work with a simplified clothing design method and a design tool kit, through which personal bra needs are visualised and creatively manifested. In my PhD research, I have worked alongside affected females internationally, in Germany, Japan, USA, Bosnia and Herzegovina and Croatia. Findings from these design sessions led me to understand how unique and specific individual bra needs are and how much they deviate from current bra constructions. In response, I developed a modular approach to breast support utilising additive manufacturing. Additive manufacturing processes, such as engineered 3D knitting, prospectively allow modular garments to be mass customisable and more versatile regarding asymmetry because the garment parts are built up rather than cut out, as is the case in cut-and-sew manufacturing processes.

The design approach towards clothing diversity that I take with this modular and customisable concept relies on a base garment that holds the sum of all collected bra needs of affected females – the bra alternative. This modular breast support garment combines articulated needs into a basic matrix that includes variations for females with two different sized breasts, one breast, or no breasts after a mastectomy. The bra alternative base garment can be worn on its own and, as such, expand the understanding and interpretation of breast support blending the gap between underwear and clothing. However, its primary purpose is to customise and respond to specific clothing needs and unique body topologies. Different bra alternative variations (neckline, armhole, cups sizes and shapes) can be extracted from this base garment according to the needs of the garment wearer.

In conjunction with the modular bra alternative, the project experiments with a novel form of breast support to alleviate pressure on sensitive skin. The breast support structures of conventional bras usually exert tension to secure the garment around the body. This tension causes pressure points on the skin at the shoulders and around the torso below the breasts. These pressure points can cause skin irritation and discomfort. They can become particularly problematic if the skin in these areas is affected by scarring and if the body is prone to lymphoedema following the removal of lymph nodes during breast cancer-related surgery. This design development experiments with a new approach towards customised breast support. A soft structural arrangement is parametrically organised according to the specific body topography. The support structure adheres to the outside of the bra alternative, leaving the inside of the garment to remain smooth and soft, which is especially important for females with thin, sensitive and brittle skin due to mastectomy scars and after-effects radiation burn.

garment wearer as a stakeholder and expert

To explore the customisability of the modular concept and to wear-test the prototype for comfort, it was essential to invite females affected by breast cancer as project participants, garment wearers and stakeholders to the design development process. For the first iterations of this speculative garment development, I, therefore, connected with Viktoria Prantauer, who lives with different-sized breasts after her breast cancer diagnosis. Viktoria is a chief patient officer and co-founder of the Hippo AI Foundation that democratises breast cancer data through AI. She became the project’s participant and co-designer of two custom bra alternative versions. The first iteration of the modular bra alternative base garment with the parametric breast support structure was customised according to Viktoria’s specific body topography. In our collaborative design process, Viktoria worked with the ’embrace’ team as an expert of her garment wearing experience on perfecting the bra alternative base garment. Viktoria also co-designed two customised variations of the bra alternative according to her personal taste and clothing needs.

digital garment designing as a visualisation and communication tool

In addition to the analogue design developments of the bra alternative base garment, a digital version of the base garment has been animated with the aim to help the understanding and further dialogue about how bra diversity could look. Digitally tailored variations visualising all possible modular variations of the 3D knitted bra alternative are digitally prototyped to scale, mirroring exact analogue textile properties. 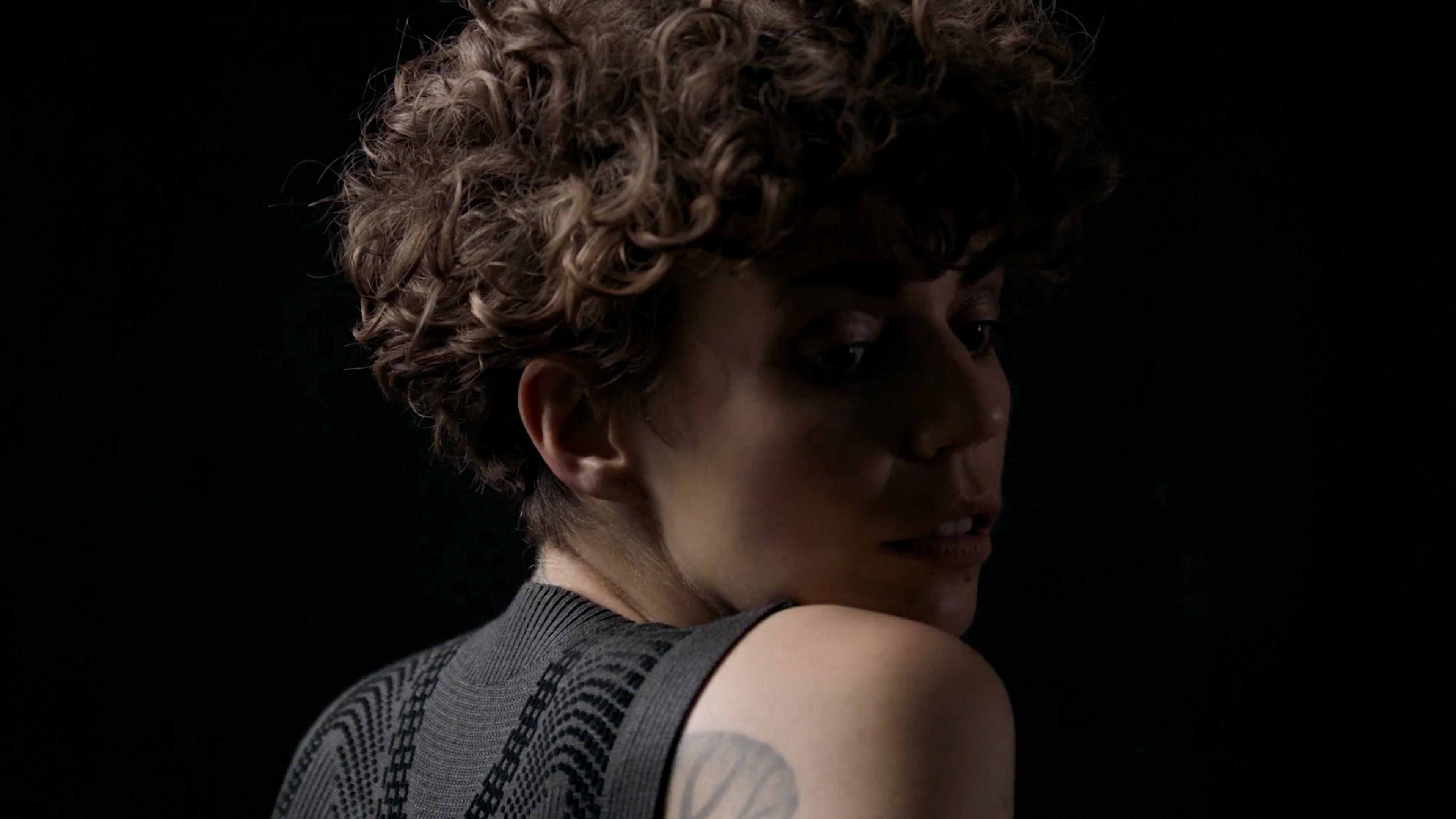 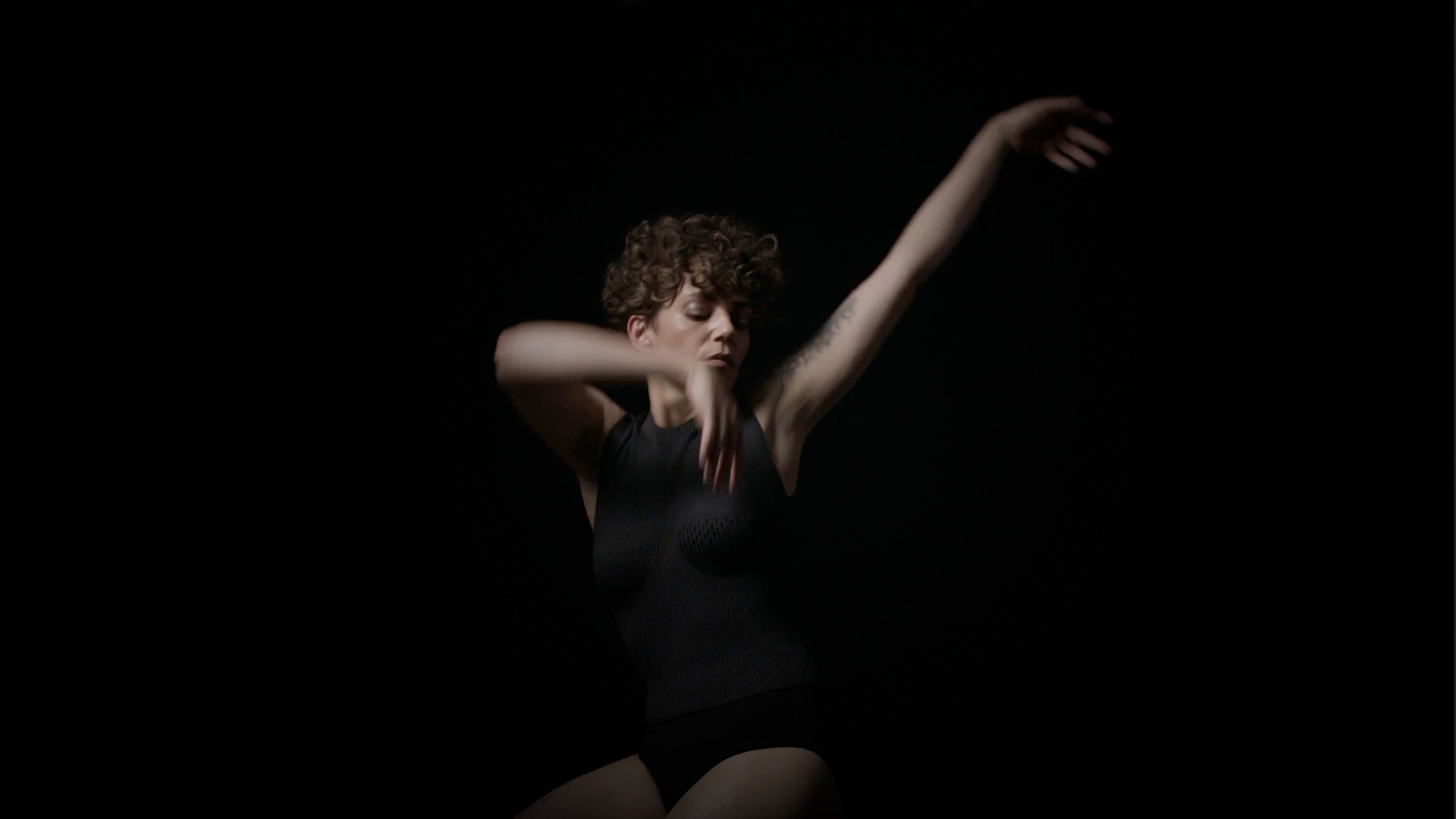 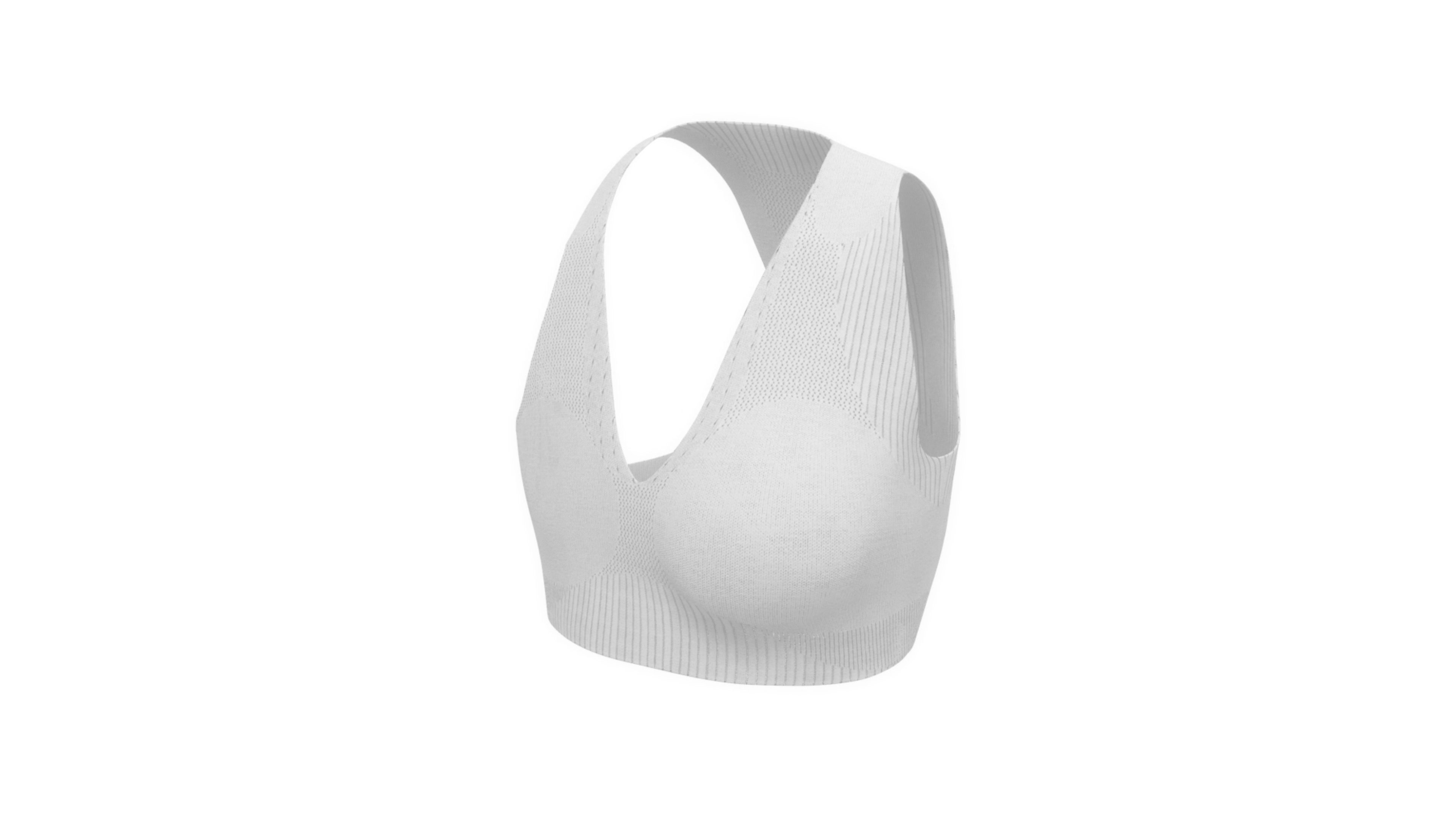 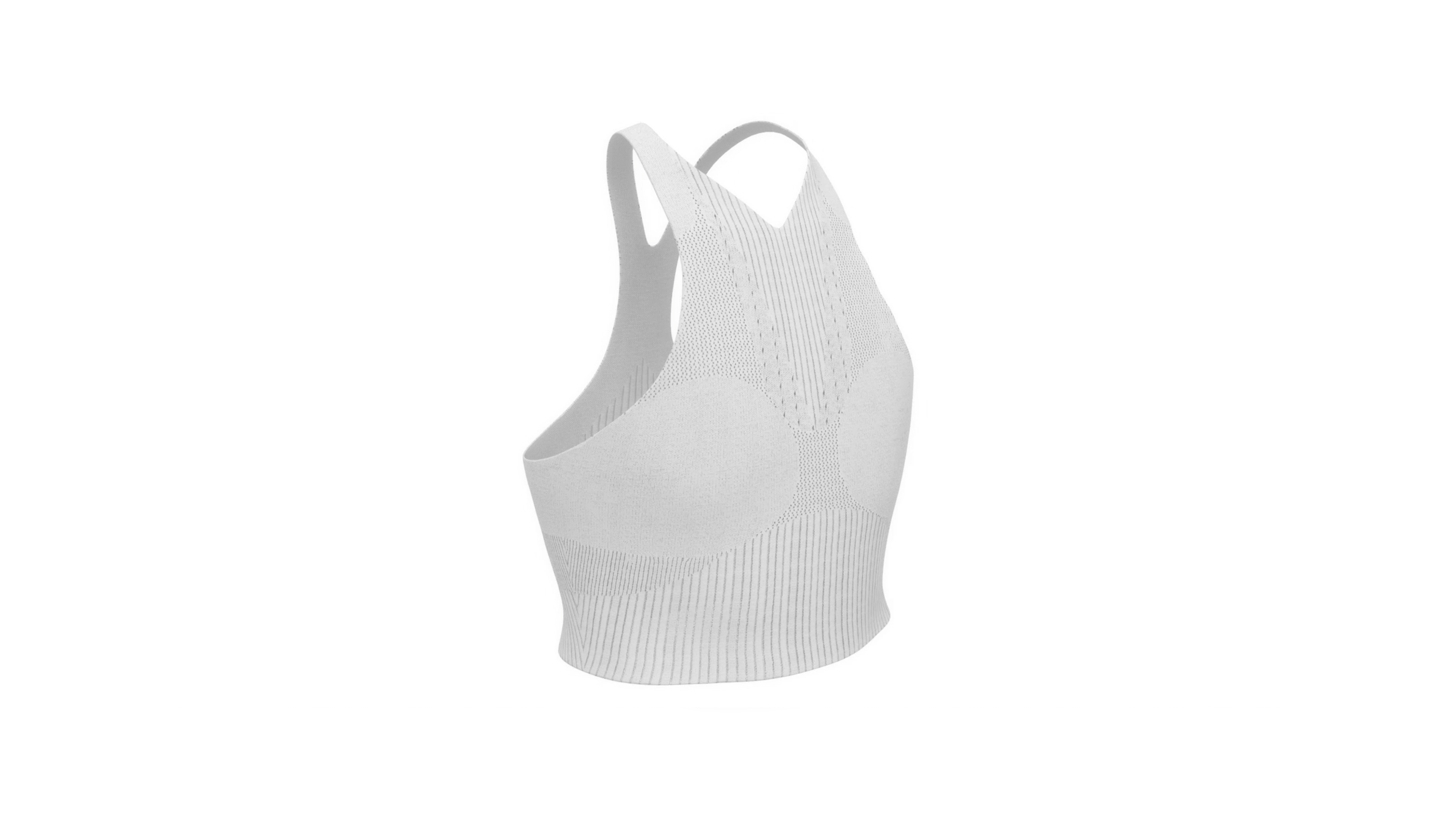 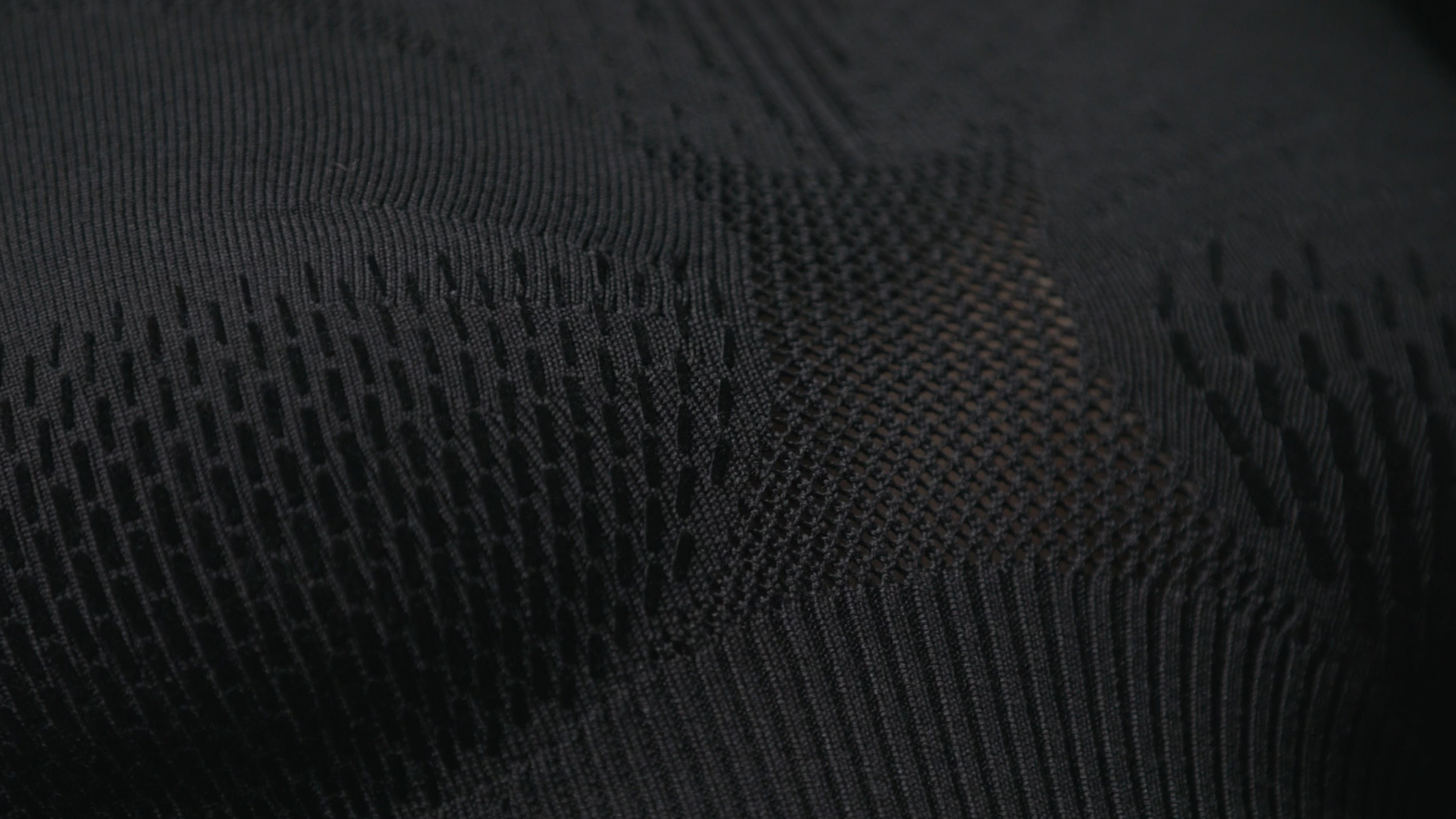 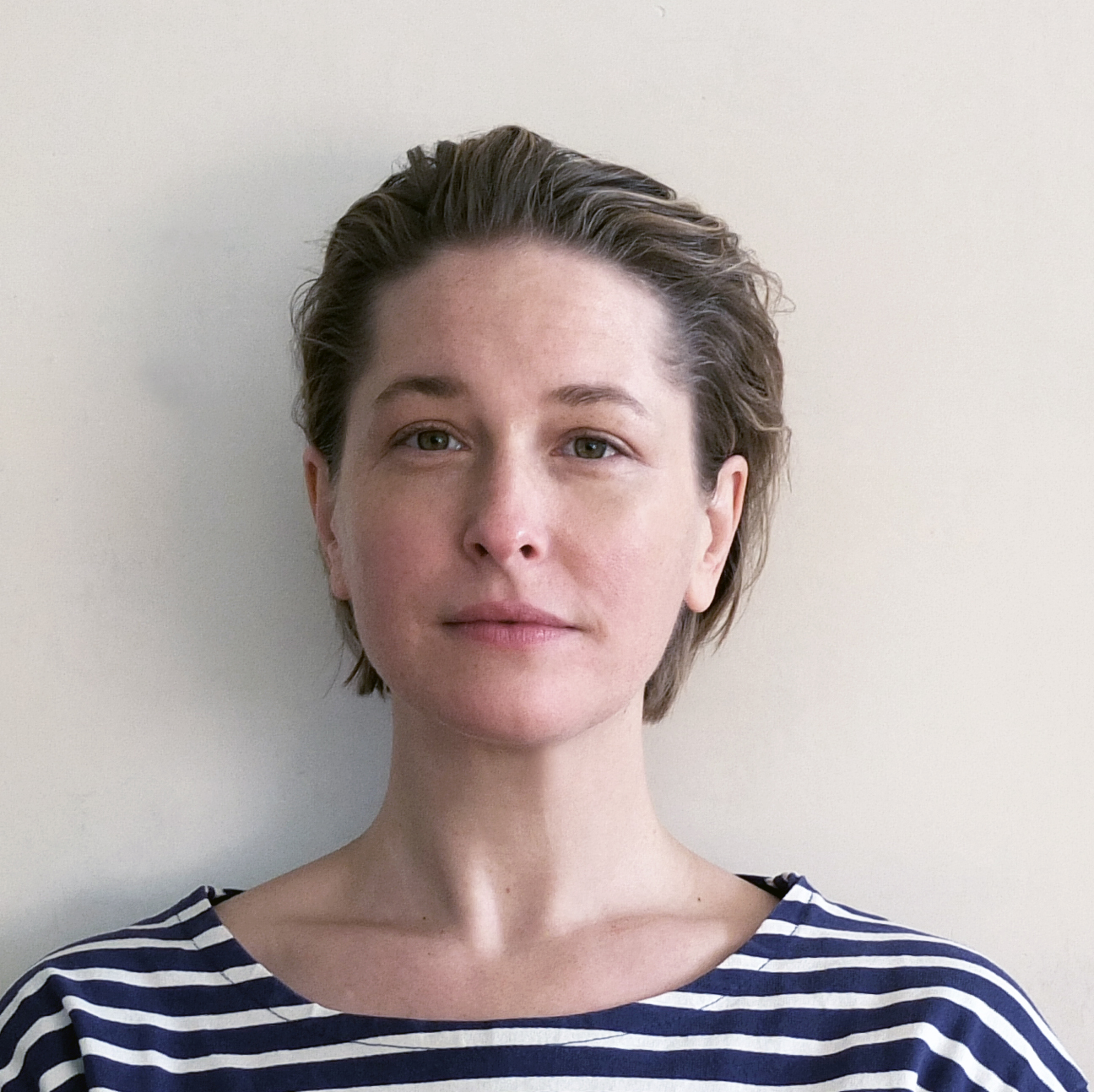 Silke Hofmann is a clothing designer and design researcher, who investigates the aesthetic and ergonomic bra needs of females affected by breast cancer. Her doctoral research at the Royal College of Art is funded by the London Doctoral Design Centre through the Arts and Humanities Research Council. She has been a JASSO-funded visiting researcher in the KYOTO Design Lab at the Kyoto Institute of Technology and has received funding awards from the European Social Fund through DesignFarm Berlin and the Horizon 2020 ReFREAM grant.

In her speculative design project ‘embrace’, she uses collaborative processes to address unfulfilled clothing needs together with affected females and a team of designers. ‘embrace’ opposes normative garment construction based on body symmetry and responds to unique body topologies and specific needs of females living with different-sized breasts, one breast, or flat after a mastectomy. This design approach expands the understanding and interpretation of breast support by introducing modularity and mass-customisability to the clothing design process. ‘embrace’ works with additive manufacturing technologies, 3D engineered knitting, 3D scanning and self-directed parametric algorithms, making designing for individual, physical and aesthetic clothing needs possible.