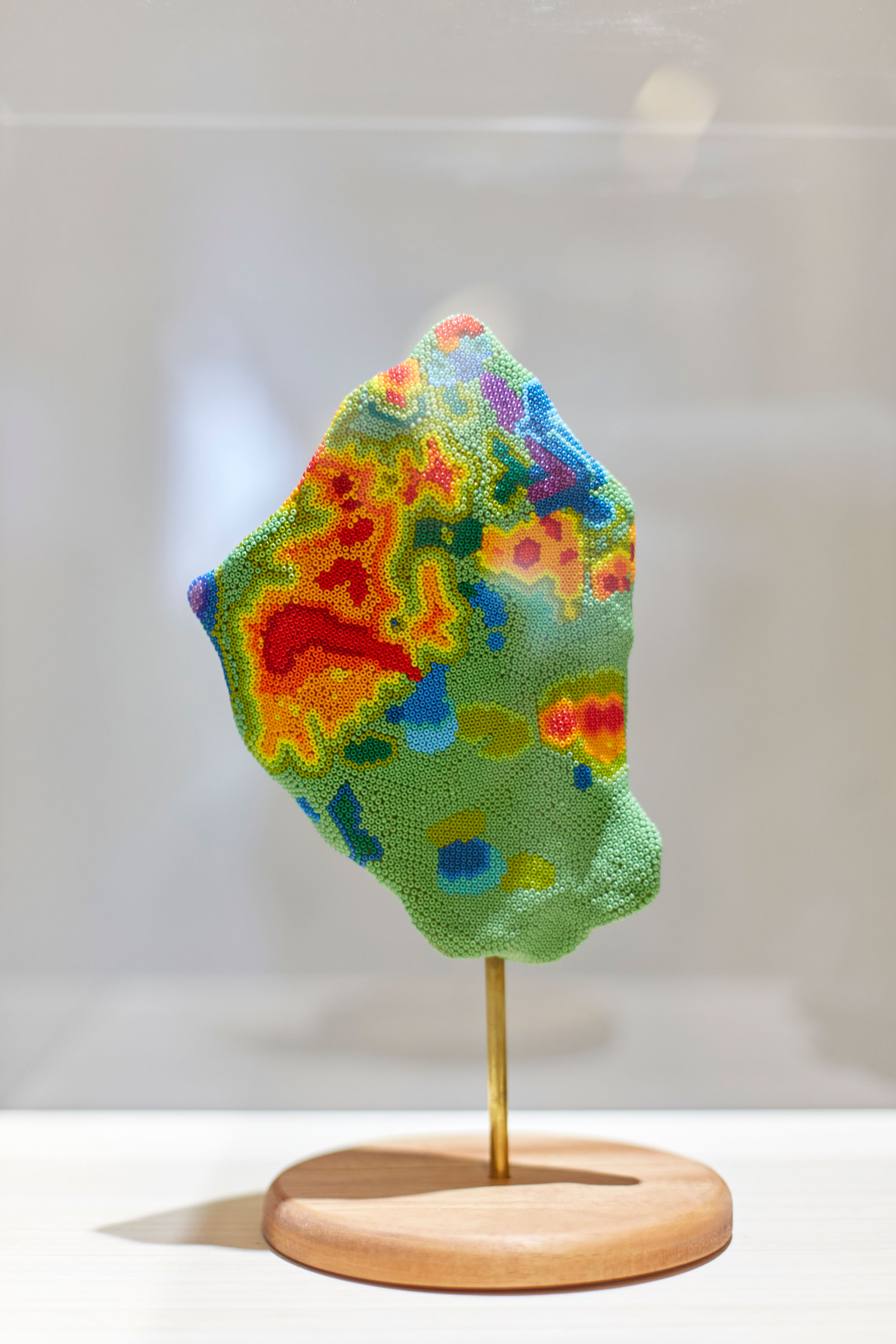 Interpretation and rewriting of the magnetic field of a mineral sample.

TSINAMEKUTA begins as a work process that takes as its starting point the discovery of a mineral called Pyrrhotite inside a mine that for the past 150 years has been producing copper, gold, and silver. Pyrrhotite is a ferrous sulfide that is distinguished for its magnetic properties. Under natural conditions, its particles align with the earth’s magnetic field when experiencing temperature changes or abrupt events. It is susceptible to magnetic induction under certain processes. The record of the Earth’s magnetic field in certain minerals can be interpreted as a memory, one of the many forms that life has to preserve the traces of experience, which are not inert sediment, but pure active knowledge.

In 2017, 600 meters deep down into the mine, a Pyrrhotite fragment was borrowed. The mine is located in the Potosino plateau, in the Cerro del Frayle. This site is one of the ceremonial centers of the Wixárika community, known in their native language as Tsinamekuta, The House of Rain. The Wixaritari have pilgrimage through these lands for more than 10,000 years, forming part of a biocultural net, whose preservation is based on the sacredness of the Earth and all its inhabitants. This research has resulted in the construction of instruments to explore the possibilities of reading, interpreting, and rewriting the original memory of the rock. In the spring of 2021, Mara’akame Jairra, a member of the Wixárika community who makes a pilgrimage with his family every year to the sacred area where Tsinamekuta rises, he agreed to participate in a ceremonial act offered to the rock at the base of the Mountain. He thus accompanied his family, the ritual activation of an instrument that was built to sonify the magnetic memory of the rock. As part of this ceremony, the electrical signal from two human hearts -ours- was recorded in the rock by magnetic induction as a representation of an offering or payment, that must be left at the site where the ceremony is held, according to the traditions of the Wixárika people

The project will conclude with the return of the mineral to the interior of the mine. So, this messenger rock will carry our offering on its return to the heart below the mountain. This project raises an ethical consideration about the mineral world as the foundation of life, and a space for reflection on the meaning of intention in the human contact with nature.

This project has received the support of the National System of Art Creators, FONCA. 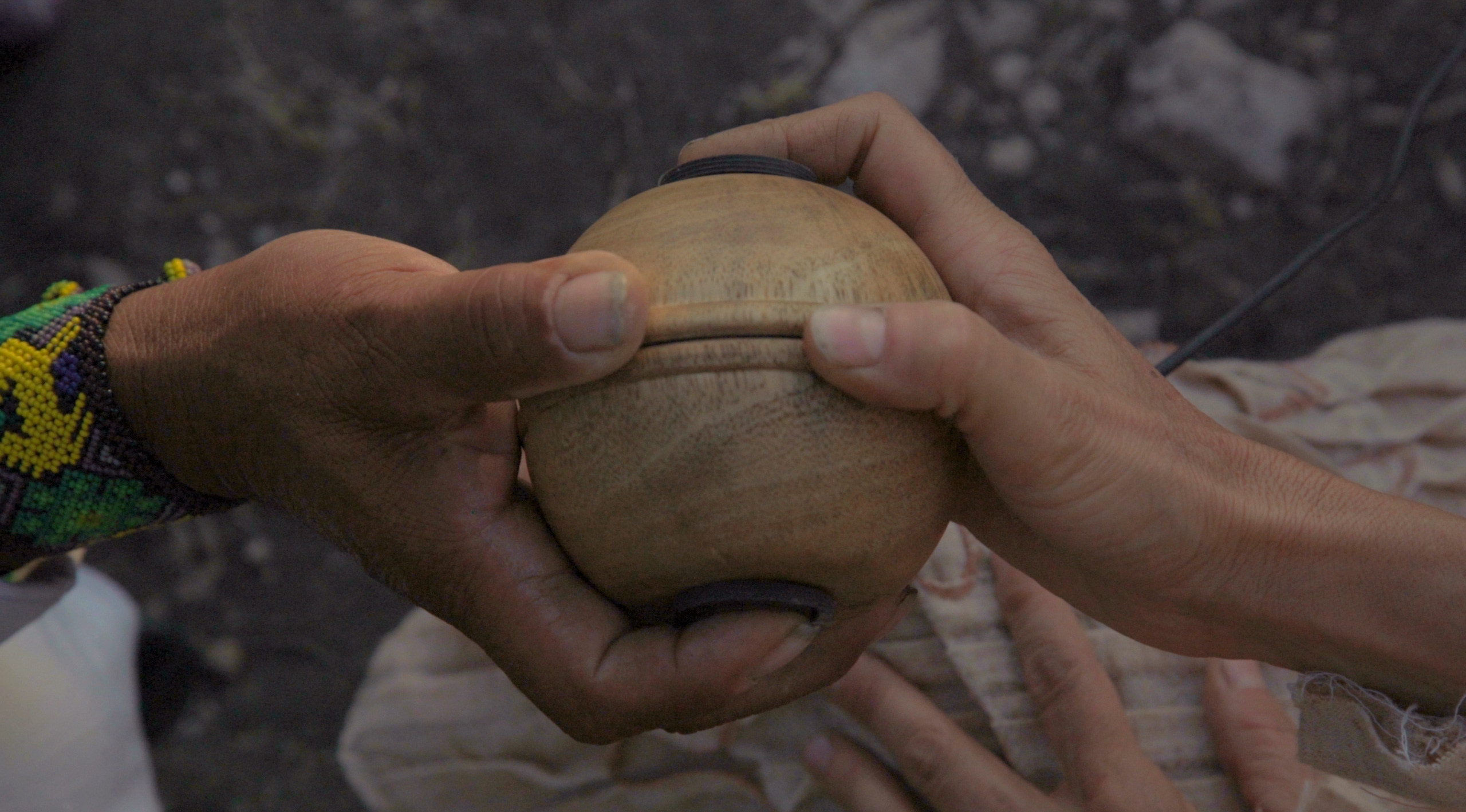 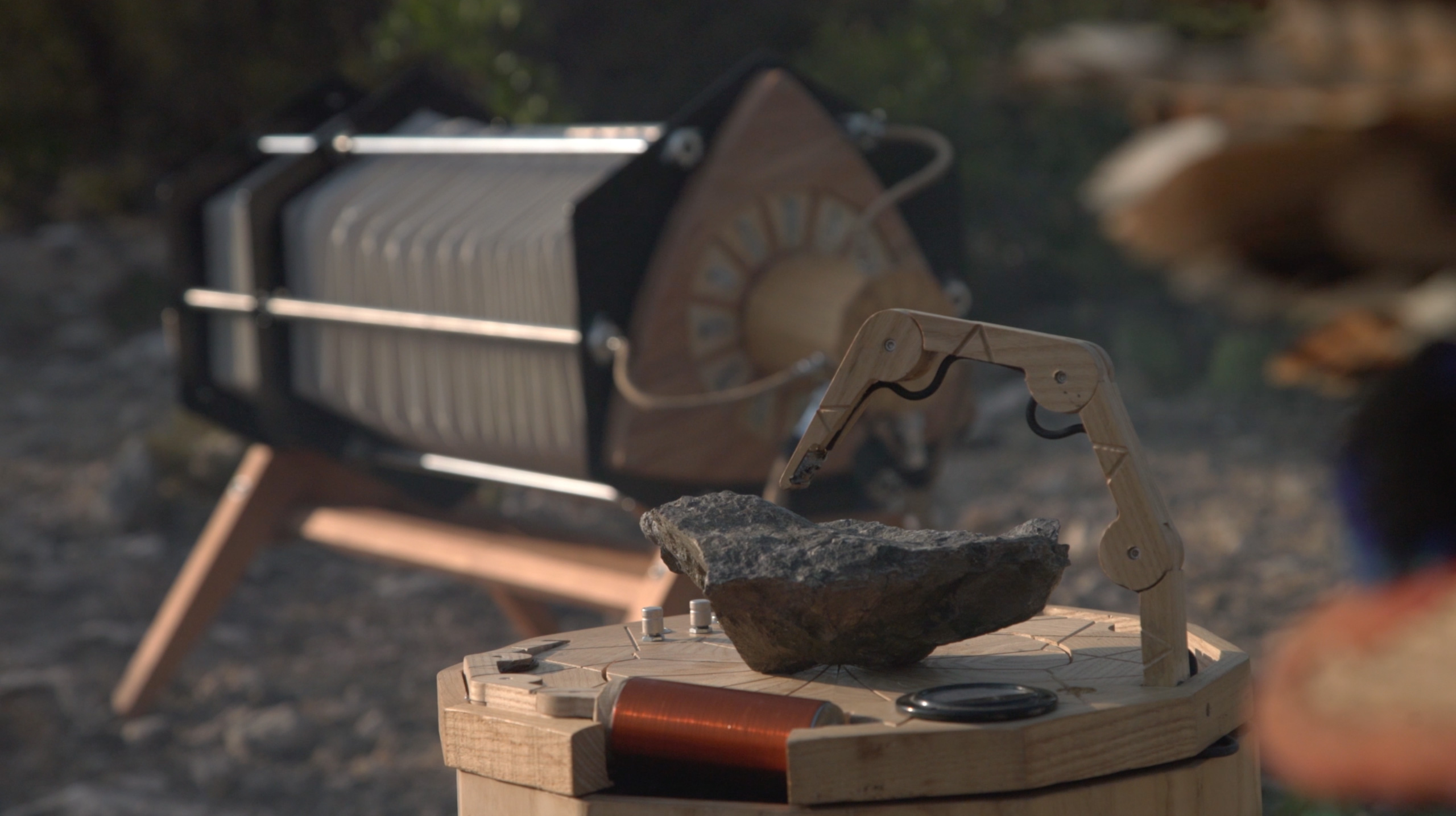 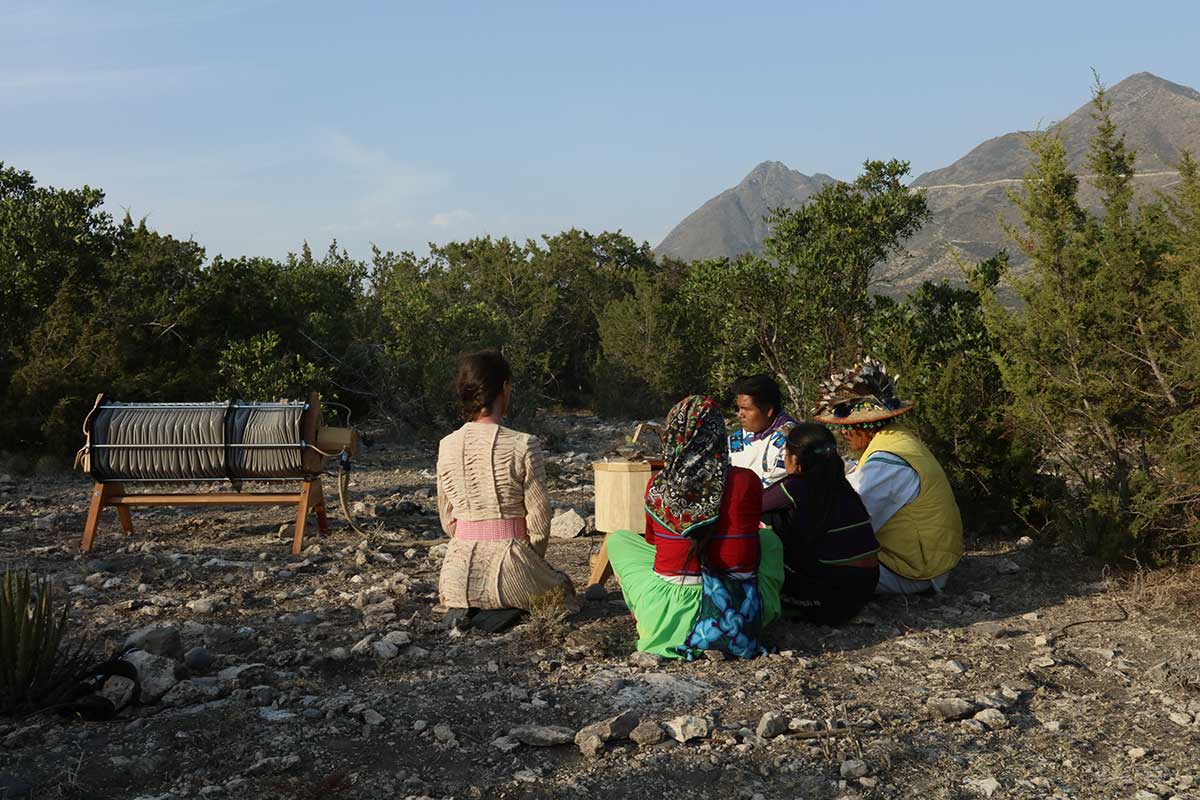 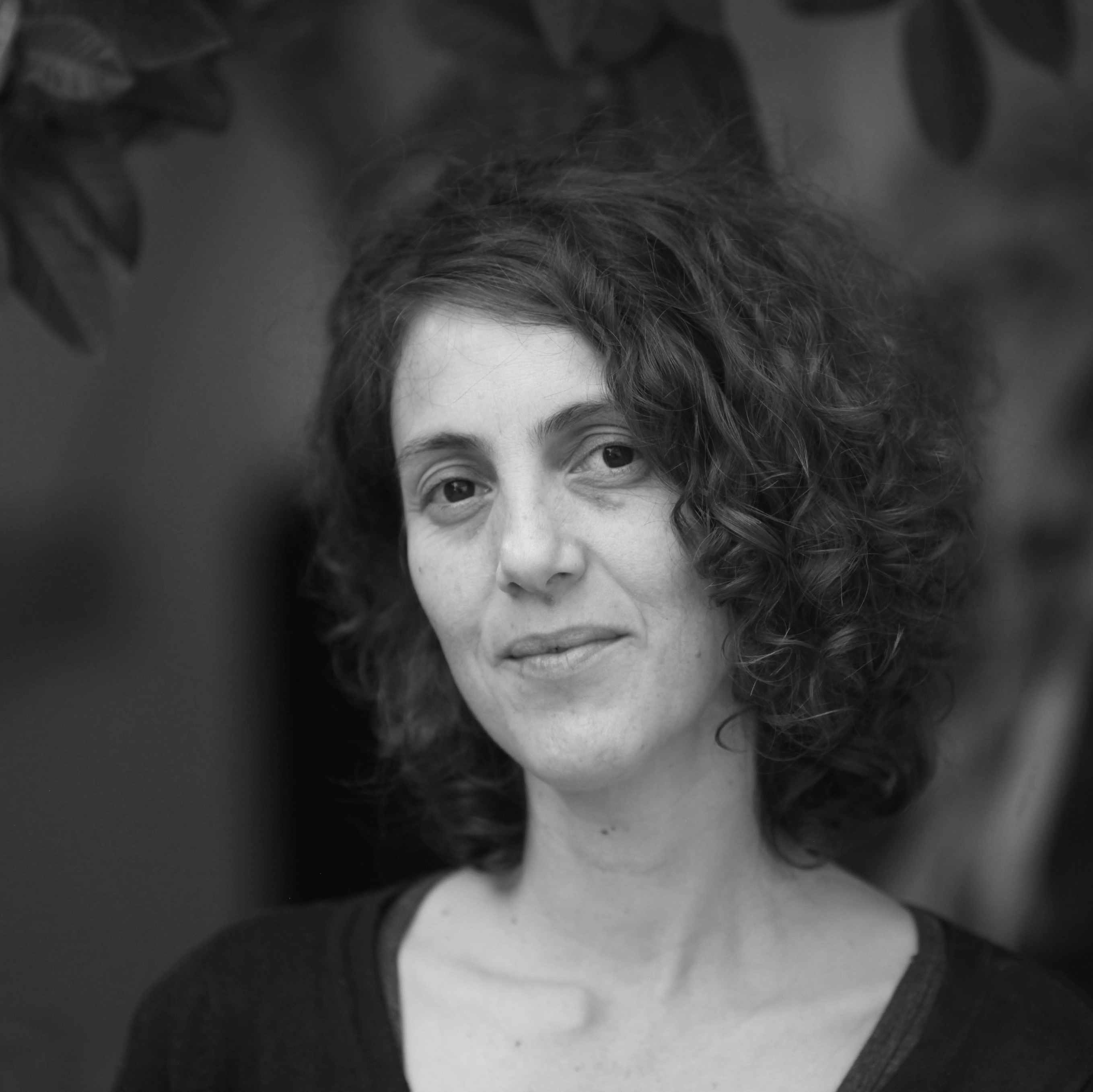 Marcela Armas works on art and its relationship to science, technology, alchemy, healing, spirituality, community, and nurturing. She is interested in observing the records of memory in matter and its living forces at the crossroads of biocultural diversity. Concerned about the recovery and validation of ancestral and community knowledge.

She investigates the link between matter and technology, and recovers the meaning of aisthesis as the ability of the heart to perceive meaning and connect with the world.

Currently she is researching the magnetic properties of minerals and their possibilities for storing information through sound as a means of interpretation and induction.  Her work articulates disciplines, techniques, work processes and research to inquire into the relationships of society with matter, energy, space-time and the construction of memory.