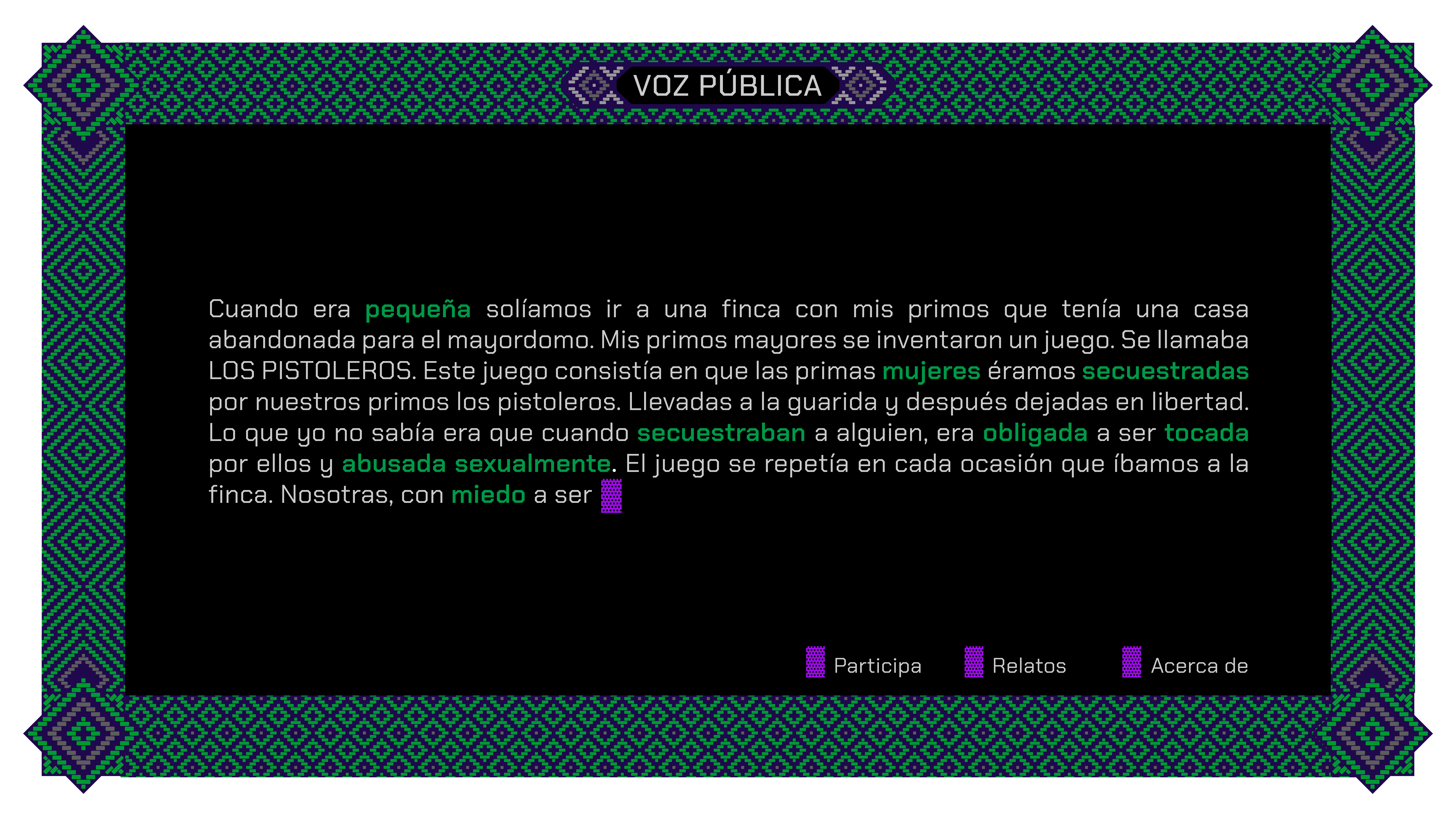 Tactical mediation and participatory art piece that seeks to amplify de protest against gender violence in the urban context of Latin America. The project is made up of three parts working together: First, an online participation platform (www.vozpublica.cc), where women/non-binary people can share personal stories of gender violence, in a textual and anonymous way. The second part is an electronic textile that “give voice and amplifies” this stories through a voice synthesizer, giving them physical presence in the public space. This textile takes as visual reference the Latin American textile tradition, and graphics related to activist and feminist struggle. The electronic part of the textile consists of an embedded computing system, conductive threat and an array of micro-speakers.  The third part of the project, consists of a series of artistic urban Laboratories called “The Textile Rebellion”. These Laboratories aim to be convivial spaces for reflection and exchange of knowledge, as well as the appropriation and collaborative creation of electronic textiles based on the initial prototype. The ultimate goal of these laboratories is to generate collective performative actions to activate these devices in public spaces with a high rate of gender violence, such as parks, squares, streets and public transportation.

From a commitment to creative activism, Voz Pública is inserted in the context of feminist protest and struggle with the intention of being a ‘voicing and amplifying’ mechanism, as a form of denunciation and collective demand to recover our right to the city.

The project takes place in the current context of Latin America, in which different forms of machismo (sexism) prevail. Just in Mexico, 10 women are murdered every day. Faced with this, and a lack of response and mechanisms to address the problem, provided by the state, multiple feminist initiatives and groups have taken to the streets to protest, and it is in this context that Voz Pública operates. The intention of the project is to be a ‘voicing and amplifying’ mechanism for those voices that have remained neutralized as a result of a society that still discriminates against women/non-binary people, a society that makes invisible the violence that crosses us, as a complaint and collective demand to recover our right to the city.

Voz Pública appropriates of the digital platforms as forms for anonymous and ubiquitous participation, of the textile as a ‘voicing and amplifier‘ mechanism to interrupt in the ears of the urban, as well of the creative rebellions as other ways to politically create and activate public space.

The project seeks to catalyze spaces for listening, agency, creation, as well as the occupation of spaces “to be together” and make ourselves visible from our own voices and narratives, outside of the institutional abstractions and with our own creative tactics and resistance tools. A space whose approach tries to open a broader notion about what we understand by technology, placing conviviality first, instead of efficiency. With this objective, Public Voice proposes an artisanal technofeminism, based on the principle of Do it With Others (DIWO), electronic crafts and handmade textile experimentation, which allow temporalities to weave and invent the Technology of “being together”, of recognizing our body as our first territory of struggle, but also as our first technology of resistance.

In this sense, Voz Pública appropriates textile technologies, on the one hand, to give physical presence through sound to those stories that have previously been shared by the project participants. On the other hand, as a way of linking these stories to a sense of corporeality. In other words, embody the stories and let them get under your own skin. In this way, by making use of textile devices, the project alludes to the body as a form of occupation of the urban space.

In summary, Voz Pública proposes an ensemble of corporal, spatial, temporal and material meanings that are interwoven from its formal development to the participatory dynamics and collaborative practices that shape it. In other words, Voz Pública seeks to string together voices to immerse us in the threads of his narratives, catalyze encounter spaces to embroider collective resistance, and in this way, weave actions in the warp of the public that amplify the protest through our “voicing” bodies.

Credits of the piece 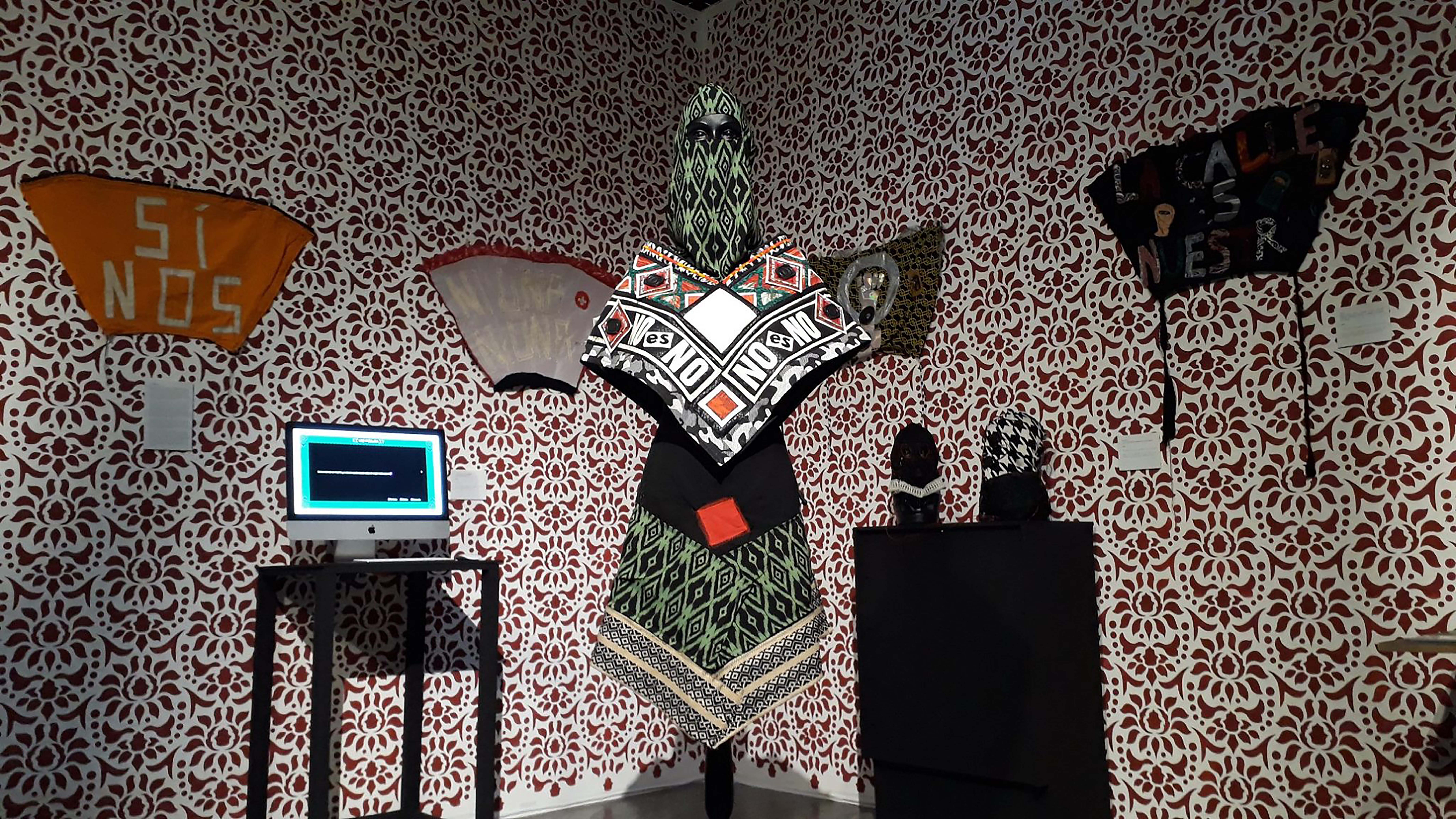 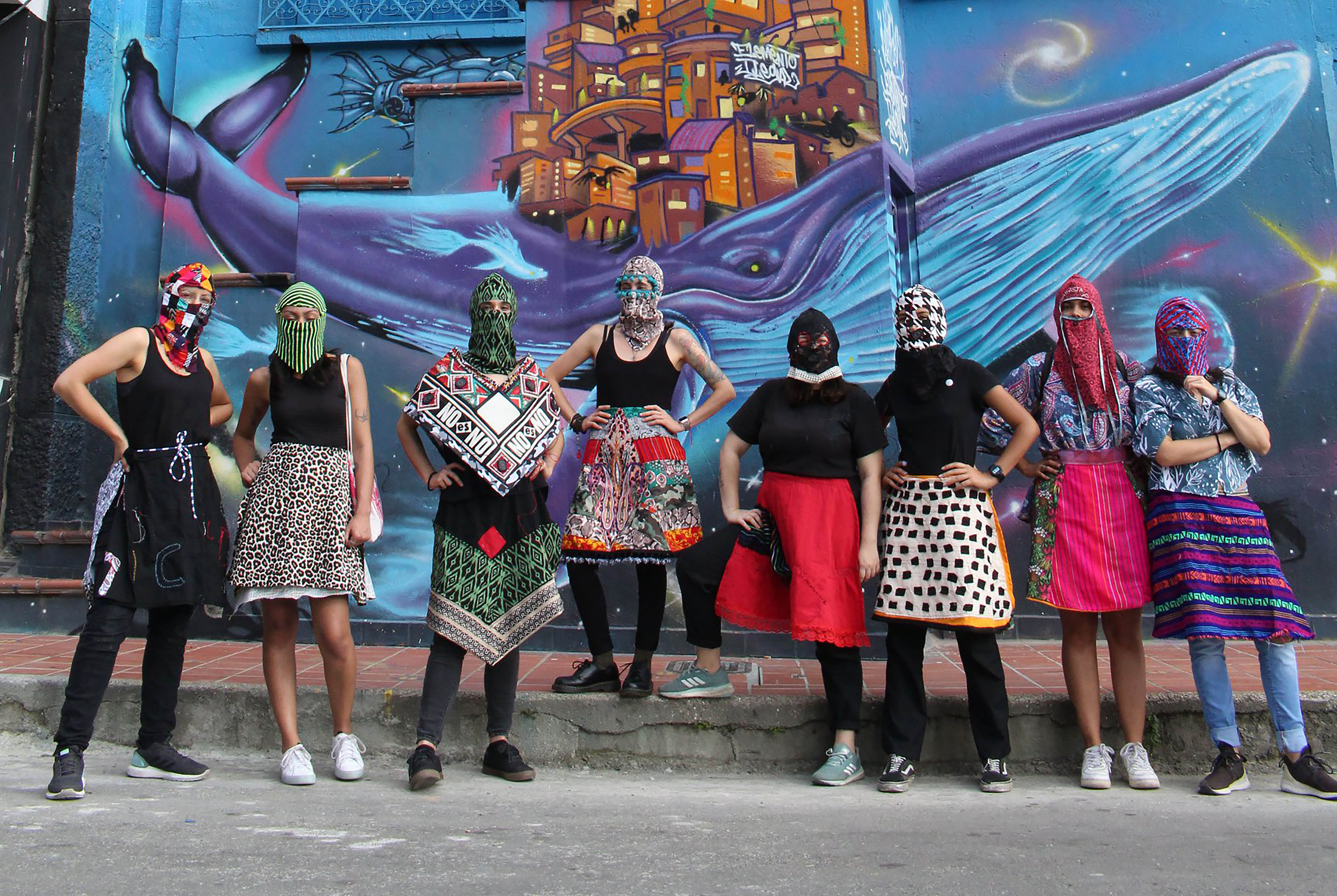 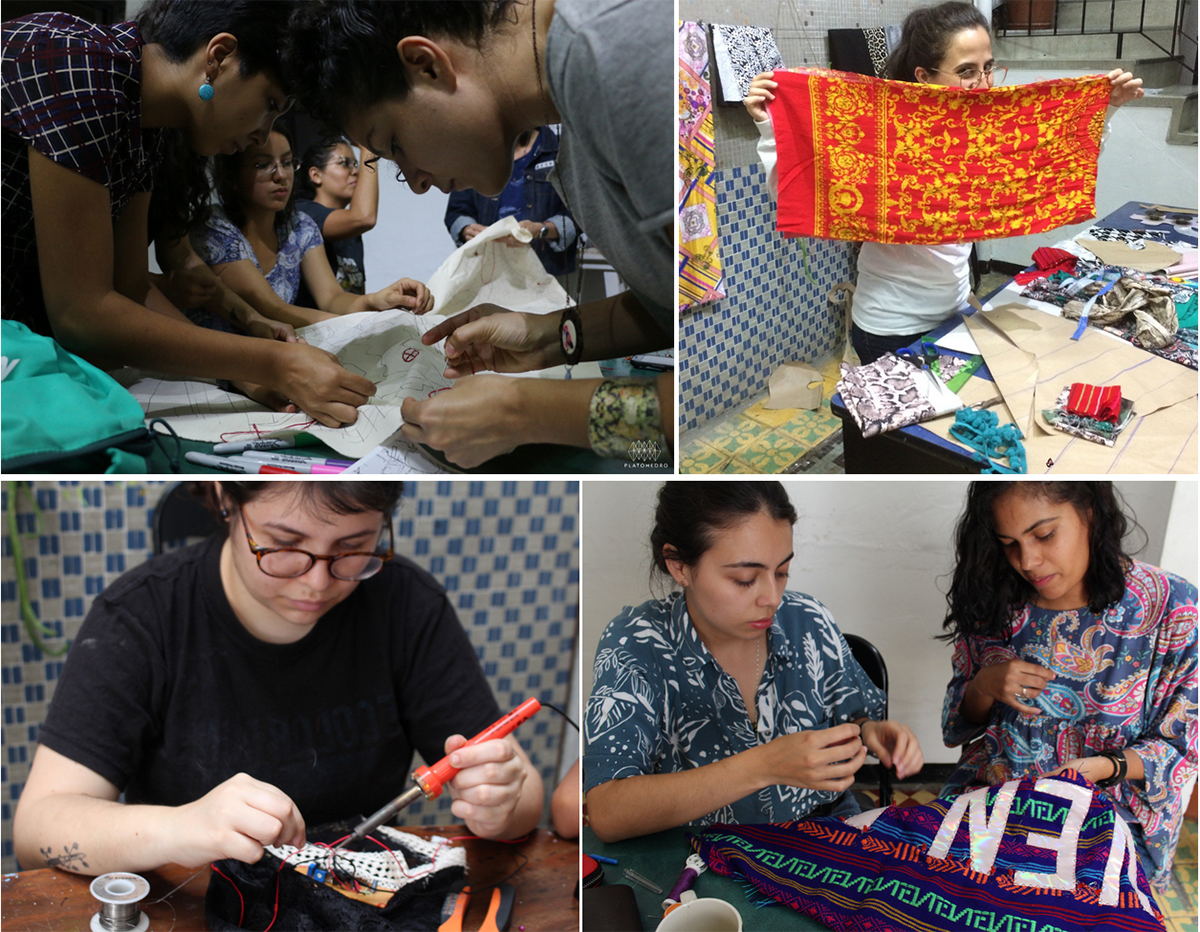 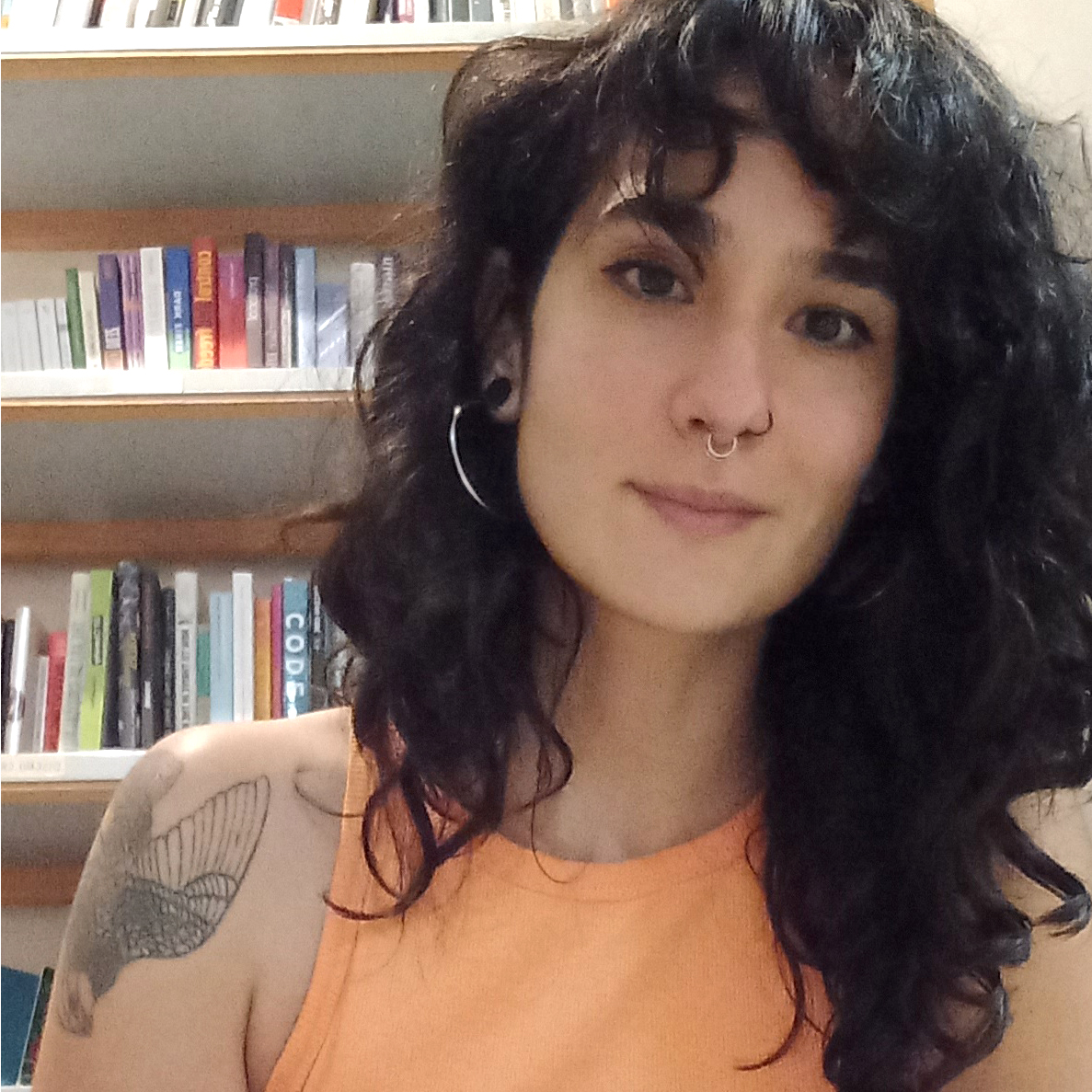 I´m a Latin american, feminist and multimedia artist from Mexico. Through my projects I seek to generate critical dialogues between art, design, pedagogy and technology in order to catalyze conversations about possible forms of organization, intervention and micropolitical action in public space. I´m part of Medialabmx where I direct the projects Voz Pública and Costurero Electrónico, in which I explores the materiality of textiles and electronics as tactical means for feminist activism and collective action. My work has been featured in Mexico, UK, Canada, Brazil, and Colombia.